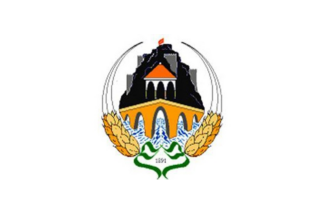 The emblem of the municipality represents the town's landscape (photo).
Osmancık is built at the base of a dramatic plug of rock up which straggles the ruins of a castle dating back to Selçuk times. The main entrance was close to the Kızılırmak river at the point where it is crossed by the graceful 250 m-long, 19-arch Koyunbaba Bridge, restored and still open to traffic. Koyunbaba, an evliya or Muslim saint, is buried near Osmancık.
[Turkey from the Inside]

The former emblem also includes two rice panicles, recalling that Osmancık is a main rice producing area in Turkey and the namesake of the most popular rice cultivar.
Before the 1990s, TARI (Trakya Agricultural Research Institute) introduced rice varieties from other temperate countries, for farmers to plant and for use in breeding programs. In 1990, Turkish rice production was dominated by introduced varieties. But, in the second half of the 1990s, Turkish-bred varieties (mostly bred from crosses among introduced varieties) were released. One of these was Osmancık-97, released in 1997, a high-yielding semidwarf variety that has desirable traits of a translucent kernel, a high milling yield, and tolerance of endemic diseases. Farmers, industry, and consumers greatly appreciated this variety, and, within a decade, Osmancık-97 accounted for 80% of domestic production.
[International Rice Research Institute]