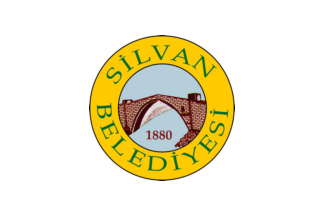 The flag of Silvan is white with the municipality's emblem. "Belediyesi" means "Municipality". The emblem features Malabadi Bridge spanning over river Batman, here the border between the provinces of Diyarbakır and Batman, also featured on the symbols of the municipality of Kozluk.

The Malabadi bridge across the Batman River on the road between Silvan and Tatvan was built by Timur Tas of Mardin between 1146 and 1147. It was restored in the late 12th century, and recently in the beginning of the 20th century.
It was once the only bridge across the river in this area, and was in continuous use until the 1950's, when a new road bridge opened upstream. The span of the bridge crosses perpendicular to the river, but the roadway is at an angle to the river, so there are angular breaks in the east and west approaches. The approaches rise from ground level to meet the central span, which is a pointed arch high over the deepest part of the river. Constructed from solid masonry, the approaches have small arches built into them to let flood-waters through. Two of the piers of the bridge sit in the river; the western support is decorated with two carved figures, one standing and one sitting. The roadway has two toll-booths, one either side of the main span. The spandrels of the main arch incorporate small rooms for weary travelers.
[ArchNet] Flag of the district government - Image by Tomislav Šipek, 29 September 2017