The flag of the Elaziğ City Council (photo) is white with the council's emblem. "Kent Konseyi" means "City Council". 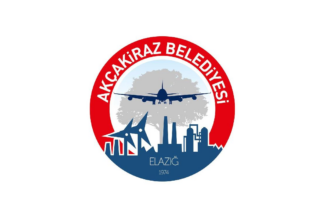 The flag of Akçakiraz (photo, photo) is white with the municipality's emblem. "Belediyesi" means "Municipality".
The emblem recalls that Elazığ Airport (official website) is situated on the municipal territory of Akçakiraz. Elazığ Airport was opened for military purposes in 1940 and it was opened to civil utilization in 1960. The airport, serving only domestic traffic, has two runways (1,720 m X 42 m; 3,000 m x 45 m)

Mollakendi is located 15 km of Elazığ.

The flag of Mollakendi (photo, photo, photo) is white with the municipality's emblem. "Belediyesi" means "Municipality". The emblem features the mosque erected in 1635 by Sultan Murad IV (reign, 1623-1640), immediately adjacent to the tomb of mullah Ahmet Peykeri.

Local legends report that the sultan met the mullah for the first time in 1635 during the Ottoman–Safavid War (1623–1639). Upon recommendation of the Mollakendi notables but fearing usurpation, the sultan sent him an amred escort and acrazy horse. The mullah showed up and the horse was immediately tamed, which proved Peykeri's holiness. The mullah predicted the seizure of the strategic town of Revan, asking the sultan to come back to him with a enemy's head. In the meantime, he brought the soldiers to a barley field and asked them to pick up ears. After the victory, the sultan asked the mullah what kind of support he had offered him. Peykeri showed the enemy's head with barley ears stuck in the eyes, explaining his recommendation to the soldiers.
Murad ordered to erect a mosque in Mollakendi. Back to the town three years later, he learned with sorrow that the mullah had passed away and ordered the building ot the tomb.
Historians believe that there was no settlement before the arrival of the mullah, which was probably commissioned by the ruler of Erzincan to settle in Elazığ.
[Municipal website] 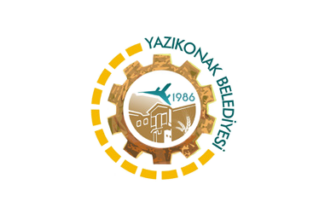 The flag of Yazıkonak (photo) is white with the municipality's emblem. "Belediyesi" means "Municipality".

FÜ (website), established on 11 April 1975 in Elazığ, is composed of 13 Faculties, 3 Vocational Schools and 4 Institutes.

Elaziğ Chamber of Commerce and Industry

Flag of the Elaziğ Chamber of Commerce and Industry - Image by Ivan Sache, 31 May 2018

The flag of the Elaziğ Commodity Exchange (photo) is white with the organization's emblem.

Elazığ Haberkent Gazetesi (Elazığ Town's News) is self-styled "a daily independent newspaper".
The flag of the newspaper (photo) is white with the newspaper's emblem, which is made of a red map of Turkey superimposed with "HaberKent" in blue letters outlined in white. The URL of the newspaper's website, "http://www.elazighaberkent.com" is added in small white letters above "Kent". The motto, "Günlük bağımsız siyasi gazete", is written in bigger white letters beneath "Haber".