image by Tomislav Šipek, 11 May 2015
current and former versions

Pasinler Chamber of Commerce and Industry

Flag of the Pasinler Chamber of Commerce and Industry - Image by Ivan Sache, 3 September 2019

The flag of the Pasinler Chamber of Commerce and Industry (photo, photo) is white with the organization's emblem. 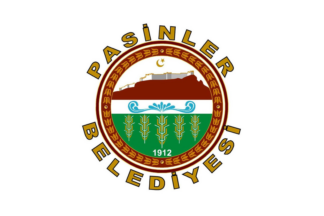 images by Tomislav Šipek, 11 May 2015
more recent and earlier versions

The first fortification at this site was built during the 9th century BC by the Urartians. In 1048, during the 'Hasankale War' between the Seljuqs and Byzantines, a castle at this site was taken by the Seljuq commander Ibrahim Yinal. The castle we see today was built in 1339 by Hasan Bey, son of an Ilkhanate king named Togay. The castle is named after the Ak Koyunlu king Uzun Hassan, who reigned during the 15th century. The inner castle of Hasankale Castle has a polygonal triangular plan and was protected by two outer walls. The walls and gate of the inner castle were built out of cut and rubble stones. In the inner castle no buildings have survived. In addition to the main gate to the inner castle, in the western wall, there is a postern near the south eastern wall. It is said that there was a secret path leading from this postern to the river below.
[Castles.nl]