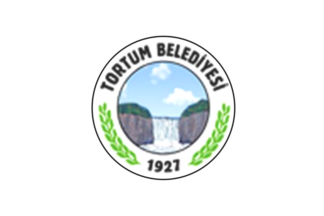 The flag of Tortum is white with the municipality's emblem.
The emblem features Tortum waterfall. The largest waterfall in Turkey (50 m drop), the waterfall was created due to the completion of the Tortum Dam and Hydroelectric Plant in 1960; it is now fed through water from Tortum Lake using the many channels and tunnels allowing it to rush down into the turbines. Seeing as the waterfall depends solely on the lake and the water within it, there are only two months in which the waterfall is seen of great power. These months are May and June when the water level of the lake is exceptionally high whereas the other months throughout the year simply bring about a rather dry bed of the waterfall.
[Seven Wonders]