The flag of Nizip (photo) is white with the municipality's emblem, selected among 114 proposals submitted in December 2019. "Belediyesi" means "Municipality".
[NRT]

The emblem features the "Gypsy Girl" (or, perhaps, a goddess), from the Zeugma Mosaic Museum (photo).

The world’s largest mosaic museum, the Zeugma Mosaic Museum, which recently opened in the south-eastern province of Gaziantep, is displaying mosaics that have been unearthed during excavations in the ancient city of Zeugma and surrounding Gaziantep. The mosaics on view have been restored by a Turkish team.
The 50-person team, headed by Art Restoration Director Celalettin Küçük, restored 140 square meters of wall paintings, four fountains from the Roman period, 20 columns, four limestone sculptures, a bronze Mars sculpture, funerary steles, tombs, architectural pieces and 2,453 square meters of mosaics.
The first surface survey started in 1931 in the Zeugma archaeological area and excavations have continued since 1971 by the Gaziantep Museum Directorate and other teams, Küçük told the Anatolia news agency. Küçük said excavations had become a focus of interest in the world thanks to twin villas, wall paintings and the Mars sculpture that were unearthed in 2000.
“We joined excavations in May 2000,” Küçük said. “By June 26, experts saved hundreds of square meters of mosaics, columns, fountains and small objects from the water of the Birecik Dam. Now the total area of mosaics that has been carried to the museum from the ancient city of Zeugma is about 870 square meters. There are also the ones that we have brought from Gaziantep and its vicinity.” Works were close to an end, according to Küçük, and when the project was completed, approximately 2,500 square meters of mosaics would be displayed at the museum.
[Hürriyet Daily News, 11 March 2011]

Archaeological excavations at the ancient Zeugma started in the late 1980s, although it was already known in the early twentieth century by locals and by some visiting Europeans that at the site some Roman mosaics and inscriptions were discovered. By the 1960s, some locals discovered the monetary value of the mosaics, and they have been involved in illegal excavations for the international market. Archaeologists who began excavation at Zeugma have reported that many of the mosaics found in Zeugma had been damaged by such illegal excavations. Archeologists are suspicious that many of the Roman mosaics in various museum catalogues, whose place of origin is described as “East Mediterranean,” or “said to be from East Turkey,” or “near Syria,” may probably be excavated from Zeugma. One notable example of the damage of this illegal activity is the mosaic of Dionysus and Ariadne. In 1992, a local guard for Zeugma discovered a tunnel, which led to the remains of a Roman villa. Archaeologists based at the Gaziantep Museum excavated the site and uncovered a mosaic depicting the wedding of Dionysus and Ariadne. They decided to preserve it in situ. However, a large part of this mosaic was cut out by looters on 15 June 1998, and has been missing since then. Gaziantep Museum exhibits this mosaic as it is to raise the awareness against looting and illegal trafficking of artifacts. 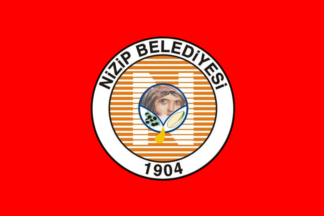 The former flag of Nizip was red (photo), or white (photo), with the municipality's former emblem. "Belediyesi" means "Municipality".