The flag of the Metropolitan Municipality of Hatay, used horizontally or vertically, is white with the municipality's emblem.

The former flag of the Metropolitan Municipality of Hatay was white with a slightly different emblem, adapted from the flag formerly used by the municipality of Antakya. 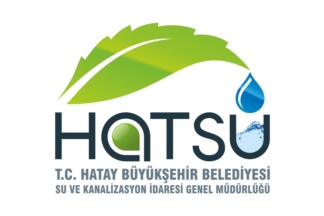 The flag of HATSU (photo, photo) is white with the administration's logo.

Hatayspor (Hatay Spor Kulübü) was established in 1967 as the merger of three clubs based in Antakya: Kurtuluşspor, Esnafspor and Reyhanlı Gençlikspor.

The flag of Hatayspor (photo, photo, photo) is diagonally divided claret-white with the club's emblem in the center.
Claret represents dignity while white represents purity; the olive tree is the emblematic tree in the region.