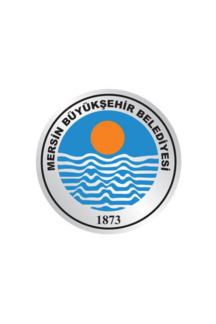 The flag of the Mersin City Council (photo) is white with the council's emblem. "Kent Konseyi" means "City Council".

The flag of MESKİ (photo, photo) is white with the administration's logo.

Taurus University (website) was established in 2009 by the Mersin Education Foundation, a non-profit educational foundation established in 1979 to provide services in the field of education.
The university is composed of 3 Faculties, 3 Vocational Schools and 3 Institutes.

The flag of Taurus University (photo, photo) is white with the university's emblem.

Mersin Chamber of Commerce and Industry

MTSO was established, under the name of Mersin Chamber of Commerce Council, on 18 December 1886 by the leading traders of the town.

Mersin İdman Yurdu Sport Kulübü was founded in 1925 to give the youth of the town of Mersin a chance to excel in sport during the long, hot summers the region experiences. With the summer holidays being three months long it gave students plenty of time to focus efforts on developing their sporting endeavors. The club went on to become widely respected across Mersin and their football team developed a loyal local following.
Mersin Idman Yurdu enjoyed a brief spell in the first division during the mid 1970s. The clubs biggest success was coming runner up in the 1982-83 Turkish Cup final. Unfortunately, they were relegated the same season and spent the next 29 years in the lower leagues before finally achieving promotion to the Turkish Super League.
[Turkish Football - Team Profile]

The official flag of Mersin İdman Yurdu, displayed vertically (photo, photo), is vertically divided red-blue with the club's emblem in the middle. The emblem is made of a red shield charged with interlaced, stylized letters "M", "İ", and "Y". The shield has a broad blue border inscribed with the club's name and year of foundation, "1925", all in white characters.

The club's supporters use a square flag, quartered red-blue (photo).