The flag of Zeytinburnu (video), also used vertically (photo) is white with the municipality's emblem. "Belediyesi" means "Municipality".
The emblem of the municipality features a branch of olive; Zeytinburnu means "Cape of the Olive Trees" in Turkish.
The fortifications recall the old, circular fortress known to the Greeks as Kyklobion and to the Byzantines as Strongylon. Abandoned after the Fall of Constantinople in 1453, the fortress fell into ruins until eventually suppressed in the 19th century. 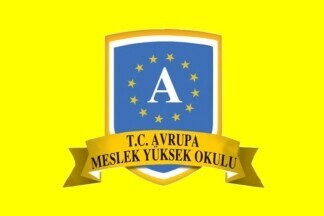 The flag of Avrupa MYÖ is yellow with the school's emblem.