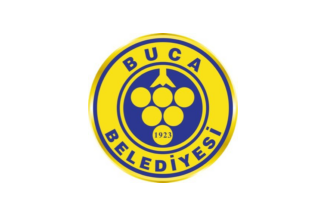 The flag of Buca (photo, photo), also used vertically (photo), is yellow, or white (photo), with the municipality's emblem in the middle. "Belediyesi" means "Municipality".

Bucaspor (Bucaspor Kulübü) was established in 1928. The club merged in 1937 with Altay and Altınordu as Üçokspor, a merger that was disbanded two years later. The club played only one season (2010-2011) in the Super League.