The flag of Çeşme (photo) is white with the municipality's emblem. The flag is also used vertically, either white or blue (photo). "Belediyesi" means "Municipality".
The emblem, adopted in December 2015, features the sea, a windsurf - standing for Alaçatı Bay, a spot of international fame - and Çeşme castle.
[Ege Haberler, 29 December 2015]

When Çeşme castle was exactly built is not known. There may have been an earlier Ottoman or Genoan fortification here in the 15th century. It is however certain that in 1508, under the rule of the Ottoman Sultan Bayezid II, the present Çeşme castle was built. It was built to answer repeated attacks on the region by Venetians in the decades before and to protect the then important harbor of Çeşme. In those times the sea would have reached the castle's western walls.
In 1770, during the Russo-Turkish War of 1768-1774, the castle was repaired after it was bombarded by Russian fleets.
Çeşme castle was built on sloping ground and has a rectangular ground plan. It consists of three baileys protected by three defensive walls.
The castle houses a small museum about the history of the area and the Battle of Chesma, an 18th century naval battle fought in the bay in front of the town.
[Castles.nl]

The Battle of Chesma, on 5th of July, 1770, became known as one of the greatest naval victories in Russian history. Fought on the same day as the Battle of Larga, it was a heavy blow for the Ottoman Empire. The Ottomans had not suffered such a devastating defeat since the infamous Battle of Lepanto. The victory at Chesma is also considered to have been an inspiration for the Greek War of Independence.
Just as expected, the Russian victory caused significant changes for the Ottomans. The Russians gained control over the Aegean sea for some time, but most importantly their plan did work. After the Ottomans were defeated the Christian countries on the Peninsula saw a chance for their revolt. The rebellions shattered the otherwise unshakeable Ottoman Empire. Soon after, the Ottoman Empire began a period of decline.
Although the Battle of Chesma was not the only event to cause the downfall of the Ottomans’ power in the Balkans, it still was a significant blow to their integrity and influence. It was also a strong motivator for the Russians to continue their quest against the all-mighty Empire.
[War History Online, 22 July 2016] 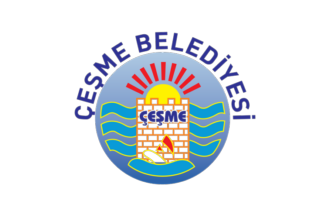 The former flag of Çeşme (photo) was white with the municipality's former emblem. "Belediyesi" means "Municipality".

The former municipality of Alaçatı (8,401 inhabitants in 2000) is "an authentic, traditional Turkish town with a 'non‑touristy', off the beaten‑track feel. Largely undiscovered outside Turkey, Alaçatı is where many Turks, including several national celebrities, spend their holidays to escape the more touristy scene in Bodrum. The yacht marina was designed by the late French architect François Spoerry, who also designed the tourist spot Port Grimaud in the Côte d’Azur.
The new Vanishing Tastes Festival, taking place in the summer and autumn every year, celebrates the recipes and culinary traditions of Aegean cuisine, through tastings, workshops and demonstrations by local and international chefs."
[The Telegraph, 12 June 2015]

The flag of Alaçatı (photo) was white with the municipal emblem.
The emblem of the former municipality featured wind turbines, a windmill, and windsurfers.

Alaçatı resort has met its electricity needs by producing electricity with wind power, a quite economic and environmentally friendly way to provide power (photo). Alaçatı, which is a tiny resort, is quite a windy place, but it no longer suffers from power cuts as its 12 wind turbines, set up two years ago, produce 7.2 megawatt electricity.
[Hürriyet Daily News, 21 June 2000]

Alaçatı has a growing reputation for something Turkey is not immediately associated with: windsurfing. Every year between 8,000 and 10,000 professional and amateur windsurfers from the United States, Australia and Europe flock to the turquoise waters of Alaçatı Bay to either participate in a variety of internationally recognized windsurfing competitions or hone their skills. The surf schools of Alaçatı are busiest between May and October when the weather boasts a constant and reliable wind. This constant breeze is suitable for all skill types though beginners benefit most due to the favorable conditions of both the landscape and the weather.
[ Professional Windsurfers' Association]

Flag of the Çeşme Sailing and Youth Club - Image by Ivan Sache, 28 August 2019

The flag of the club is white with the club's emblem, which features in the center the corporate emblem of Arkas Holding.

Arkas Holding (website), a company founded in 1902, currently operates in many different fields, including, agency services, ship operations, port operations, logistics services that integrate sea, land, rail and air transportation as main fields, and bunkering, automotive, insurance services, information systems, and tourism. Arkas Holding currently operates in 23 countries with 59 offices, 13 of which are located in Turkey.
Arkas Container Transport S.A. is the name adopted on 1 January 2010 by EMES Shipping and Transport S.A., a company originally established in July 1996 in order to offer the first container shipping line under the Turkish flag. Arkas continues to provide services under the brand name Arkas Line (website).
The Arkas Line container fleet has 130.864 TEUS with the following types: “open top”, “high cube”, “flatrack”, “palletwide” and “reefers”, all of which are used on regular service between ports on the Mediterranean, West Africa and the Black Sea with its fleet of 41 vessels which includes 32 vessels belonging to Arkas.