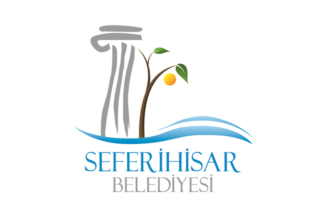 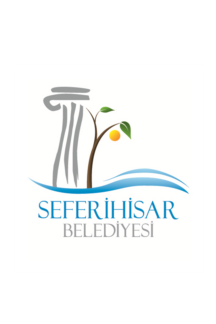 The flag of Seferihisar (photo, photo), also used vertically (photo), is white with the municipality's emblem in the middle. "Belediyesi" means "Municipality".
The emblem of the municipality features a column, representing the old town of Teos, located near the village of Sığacık, and an orange-tree.

Teos was a city of Caria situated on a peninsula opposite Sainos, it was an asylum for the Greeks likewise for the Minyæ of Orchomenos; then came colonies from Ionia, Athens and Bæotia and gradually the population became Grecian. This very prosperous city was one of the first attacked by the Persians; the inhabitants fled into Thrace and founded Abdera, during the reign of Cyrus. Those who remained in Teos allied themselves with the Athenians. Later they revolted, going over to the Spartan rule, but were afterwards reconquerred by the Athenians. The walls, recently discovered 3 3/4 miles in circumference, date from this time, as do also the greater part of the monuments which made it one of the most beautiful cities of Ionia. Teos was celebrated for its wine and, therefore, for the worship of Bacchus. Here was born the poet Anacreon. Here too was the home of a body of bacchanalian artists who furnished actors for the theatres of Asia and the Archipelago. It was the beginning of the ancient theatre. In order to further commerce and the pursuit of the fine arts, Teos, after having saved the fleet of the Roman pretor Regulus from Antiochus, King of Syria, secured for its territory in 193 B.C. from Rome and a great number of Grecian cities the right of perpetual asylum, this privilege being largely due to the temple of Bacchus. During the Christian era almost nothing is known of this city. Teos is believed to have been destroyed by an earthquake.
[Catholic Encyclopedia]

Archeological investigations are performed in Teos by the METU (Middle East Technical University).
The topographical maps of the antique site showing the original buildings and terraces that were built on has been made, which attested the efficiency of land use in antiquity. The temple of Dionysos, agora and city walls at the acropolis area and the antique harbour were the main focus of the research.
The temple of Dionysos is to be considered as one of the important buildings of antiquity accounted by Vitruvius in his Ten Books on Architecture (III.3.6-8, IV 3.1). The remnants of the temple was a hexastyle peripteros with eleven columns on the sides agreeing with Vitruvius' account. The new research at the temple brought the possibility that it may be prostylos constructed on a stylobate of 8.10 x 19.3 metres. The length of the pronaos was 2.10 metres, cella 9.5 metres and opisthodomos 2.10 metres. The proportions of the pronaos, cella and opisthodomos parallels to the temple of Athena at Priene, Magnesia Zeus Sosipolis.
[METU website]

Seferihisar is one of the main citrus production centers in Turkey and one of the areas where best of mandarins grow. The new season is celebrated every year in November (for the 16th time in 2015) with the Mandarin Festival.
[Turkish Citrus Promotion Group website]

Flag of the Teos Yacht and Sailing Club - Image by Ivan Sache, 28 August 2019

The flag of the club (photo, photo) is white with the club's emblem.

The club is based in Teos Marina, whose flag (photo, photo, photo) is white with the marina's emblem.