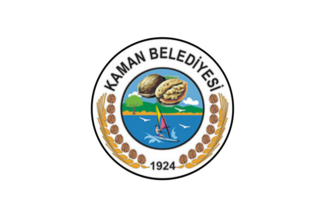 The flag of Kaman (photo) is white with the municipality's emblem in the center. "Belediyesi" means "Municipality".
The emblem features the Kalman walnut.

The Walnut Breeding Program of Kahramanmaraş Sütçüimam University released three new cultivars as Maras 18, Sutyemez 1, and Kaman 1 in 2009 and 2010.
The Kaman 1 cultivar has a high kernel percentage, and bears flowers mostly laterally (80%). The cultivar leafs out 10 d before ‘Chandler’ and fruits are harvested 15 d before ‘Chandler’. The cultivar has a small ratio of a leaf blight scores. ‘Kaman 1’ is protogynous and suggested potential pollinizers are ‘Franquette’, ‘Bilecik’, ‘Pedro’, and ‘Şen 2’. The nut shape of the cultivar is very unique and can be easily distinguished from the other cultivars. Nuts of this cultivar weigh around 13–14 g, and have a medium-rough surface. The kernel is light colored, weighs around 7–8 g, and makes up ≈52% to 57% of the total nut weight. Sensory analyses have given high scores to ‘Kaman 1’ as well.
[M. Sutyemez. 2016. New walnut cultivars: Maras 18, Sutyemez 1, and Kaman 1. HortScience 51, 1301-1303]

The Kaman Walnut Culture and Art Festival has been celebrated every year in October since 1989. A big monument featuring three walnuts also honors the local fruit. Over the last years, frost decreased Kaman walnut production, so that walnuts produced elsewhere were sold as Kaman walnuts. The local producers actively seek official protection against the misuse of the Kaman name.
[Kırşehir Aktüel, 10 October 2018]

The flag of the Kaman district government (photo) is white with the government's emblem. "Türkiye Cumhuriyeti" means "Republic of Turkey". "Kaymakamlığı" means "District government".
The emblem features Atatürk's equestrian monument, erected on Republic Square in Kaman, and the Kaman walnut.
[]