The flag of Kırşehir is white with the municipality's emblem (image). "Belediyesi" means "Municipality".
The municipal emblem, adopted in December 2010, features the Cacabey Mosque, originally built as a madrasa (Quranic school), and presented by the Mayor as "the world's first medieval astronomical observatory". The colors, brown, orange and Navy blue, are symbols of future, stability, and power and force, respectively.
The orange curved strip is a symbol of the sunrise and future, recalling that the Turkish space station, named Cacabey, shall be launched in 2023 [indeed, the establishment of the Turkish Space Agency, planned to 2017, is now postponed to 2023].
[Xinua, 10 December 2010]

The Cacabey madrasa was built in 1272-1273 by Nureddin Cibril Bin Cacabey, Governor of Kırşehir during the rule of the Seljuk sultan Kaykhusraw III (1265-1284). The building was allegedly used as an observatory during that time.
Entrance to the complex is provided by the massive Crown Gate, built with stones of two colors in the characteristic Seljuk style of the time. The facade is flanked by columns with hanging spheres interpreted as representations of the moon and decorated with geometric figures said to represent the planets of the Solar system. The inside building has an open cupola and a well allegedly used to study the movements of the stars that reflected in water.
The most striking elements of the madrasa are the three hollow columns erected in the outer corners of the building, shaped like the NASA space shuttle.
The observation tower (21 m in height), today the mosque's minaret, was built 22 cm apart to the southwest facade of the structure. The complex also included eight rooms for students.
[Kırşehir City Guide]

There seems, however, to be little firm evidence that the madrasa was actually used as as "the world's first medieval astronomical observatory", as recalled by the late Aydin Sayili (1913-1993), Professor of History of Science at the Ankara University.
The Jaja Bey madrasa of Kırşehir was used as an observatory according to local tradition which claims that previously an "observation well" was in existence directly underneath the circular hole of the dome of the madrasa building and that this device was intended to serve for day-time observation of stars. A small-scale excavation has corroborated the claim of the existence, of a well, and other considerations may be adduced which make the other particulars of the claim also seem rather reasonable. There is no conclusive evidence, however, that the well was built or utilized as an "observation well". The water-bearing level was found at a depth of about seven meters. As this probably represents the original state of the well, it tends to give one the impression that the well was not an "observation well". Apparently, however, "observation wells" need not have been dry. For claims of the observation of the reflected image of the sky in the water of the wells exist at least on two occasions, both of which are mentioned in this paper.
[ Ankara Universitesi Dil ve Tarih-Cografya Fakultesi Dergisi 11, 149-155 (1953)] 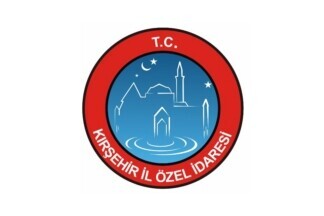 The flag of Kırşehir Special Provincial Administration is white with logo.
https://bembirsen.org.tr/kirsehir-il-ozel-idaresi-ile-sds-imzaladik

AEÜ (website) was established on 17 March 2006 in Kırşehir. AEÜ is composed of 7 Faculties, 4 Schools, 6 Vocational Schools and 3 Institutes.

Ahi ("my brother") Evran was born in Hoy (Nakhichevan) in 1171, as Sheikh Nasreddin Mahmut al-Hoyi; he is said to have lived for 90 years but there is no definite information on his death. The tradition, however, claims that Ahi Evran was killed in Kırşehir during the Mongol invasion of Anatolia. His mausoleum was erected in 1450 by a member of the Ahilik.
While a noted Sufi-oriented scholar in Baghdad, Ahi Evran was invited to Anatolia by the new Seljuk sultan. He became famous in Kırşehir where he designed a medicine from the venom of snakes that infested the town at the time.
Ahi Evran established in Kayseri the Ahilik organization, a kind of a medieval professional chamber for craftsmen and merchants. Such an organization, based on solidarity and moral values, was needed because of the lack of central state authorities that would regulate professional activities. Back to Kırşehir, Ahi Evran established in the town as a tanner; he became a familiar of Haji Bektash Veli (1209-1271), the founder of the Bektaşi organization. The Ahilik system was encouraged by the first Ottoman rulers, under the influence of Sheikh Edebalı (1206-1326), the mentor and father-in-law of Sultan Osman Gazi (1299-1323/24). The Republic of Turkey also recognized the Ahilik legacy.
TESVAK (Türkiye Esnaf ve Sanatkarları Ahilik Vakfı - Turkish Tradesmen and Artisans Ahilik Foundation) is the modern form of Ahilik.
[Kültür Gündemi, 24 September 2013

Kırşehir Chamber of Commerce and Industry

The flag of the Kırşehir Chamber of Commerce and Industry (photo, photo) is white with the organization's emblem.

Kırşehir Sugar Factory was established in 2020.
During the 2020-2021 campaign, which lasted from 15 September 2020 to 25 December 2021, 675,000 tons of sugar beets were processed, yielding 92,000 tons of crystal sugar. This was the highest yearly production ever obtained in the the factory.
The processed sugar beets were grown by 2,173 farmers scattered over 82 villages in the municipalities of Kırşehir, Mucur, Gülşehir and Şereflikoçhisar.
https://www.sabah.com.tr/gundem/2021/02/22/kirsehirde-21-yilin-en-yuksek-seker-uretimi-gerceklestirildi
Sabah, 22 February 2021

The flag of Kırşehir Sugar Factory is white with the company's logo.
"TG" stands for Tutku Gıda, the group owning the factory.