The flag of Darıca (photo, photo) is white with the municipality's emblem. "Belediyesi" means "Municipality".

The emblem, registered on 17 September 2016 as a trademark, was approved in April 2016 by the Parliament.
The emblem features the Gönül Birliği Kapısı (Heart Union Gate) monument (photo), the town's landmark. The monument, designed by Art İstanbul, recalls that Darıca is the "Gate of East to the West". Darıca was indeed the last stop of the Ottoman armies heading to Constantinople. The two crescents represent the Seljuk state and the Ottoman Empire, respectively, while the star represents the Republic of Turkey and the stability of the Republican civilization, supported by the two former deep-rooted civilizations.
[Gebze Gazetesi, 18 April 2016]

The crescents are decorated in Seljuk kündekâri style, based on eight- pointed stars.
In Anatolian Seljuk wood workmanship, carving is the technique most appropriate to, and most frequently employed for, the decorative style in which thuluth inscriptions and palmetto and half-palmetto motifs are often used amid rumî branches and tendrils. Decorations incorporating geometric patterns also occupy an important place in Seljuk wood workmanship. The ‘kündekâri’ technique is used especially on large surfaces such as doors, shutters, pulpits and wood panelling. Pieces of wood cut in lozenge, star or octagonal shapes are joined together inside regularly hollowed out strips of wood in an interlocking pattern.
[Turkish Cultural Foundation] 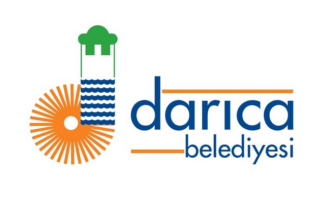 The former flag of Darıca (photo, photo, photo) was white with the municipality's former emblem.

The emblem must represent the remains of Darıca castle.
Darıca was probably founded during the Kingdom of Bithynia, between 297 and 74 BC After first having been part of a Roman province it became a Byzantine possession during the 7th century. The Byzantines built Darıca castle as a fortress that was meant to protect the town. At that time the castle was first called Tararion and later Toricion and Kalos Agros.
It stayed in Byzantine hands until 1329. Then the region was lost to the Ottomans after a Byzantine army, led by the emperor Andronikos III Palaiologos, lost the Battle of Pelekanon from the Ottoman Bey, Orhan I. In 1403 Darıca, together with Eskihisar and Hereke, was shortly returned to the Byzantines by Süleyman Çelebi in return for Byzantine support in interregnum following the Ottoman defeat to Temurlane at the Battle of Ankara. Süleyman's brother Mehmet however quickly conquered Darıca.
At present the remains of the castle consist of a single round corner tower and one part of a wall. It sits on a gentle slope in the center of the town. Considering the present street layout it may have had a rectangular ground plan.
[Castles.nl]