Seydişehir was already settled 5,500 years ago, as evidenced by remains of a Neolithic settlement excavated in Suberde mound, neat the village of Gölyüzü, 10 km south-east of Seydişehir. Hittite and Phrygian settlements were subsequently established in Karabulak, Bostandere, Dikilitaş and Akçalar.
The Roman town of Vasada was established at the foot of Mount Kestel near Bostandere, north-east of Seydişehir. In 1969, works performed to supply Bostandere with freshwater revealed remains of the theater, while Roman writings can be seen on stones re-used to build the modern village's houses. Several other artifacts from Vasada are shown in the Konya Archeology Museum, such as a limestone altar dedicated to Jupiter, another limestone altar decorated on one side with a woman and on the other side with a cornucopia, a coin minted during August's reign. The museum also shows a Roman oil lamp found in Dikilitaş, a figurine found in Akçalar, a vase found in Çalmanda, and a funerary stele excavated from a tomb in the ruins of Elita, close to Seydişehir. The lion statues found in the ruins of Hisartepe, 10 km of Seydişehir, are exhibited in the municipal park.

Seydişehir appears to have been founded during the rule of Eşrefoğlu Mehmet Bey (1302-1320), a Seljuk prince. The legend says that Seyyid Harun Veli, a descendant of the Prophet, left Khorassan (a vast region covering parts of Iran, Tajikistan, Turkmenistan and Uzbekistan) with his brother Seyyid Bedreddin and their disciples in 1301, upon divine order. After the death of Seyyid Bedreddin in Hatunsaray was guided to Trogitis, where he erected a mosque. Reluctant at first sight, Eşrefoğlu Mehmet Bey soon understood that Seyyid Bedreddin was a saint and assisted him in the building of a new town, Seydişehir (Seyyid Town).
After the termination of Eşrefoğlu's principality by Khan Timurtash in 1326, Seydişehir was incorporated to the Hamidid Beylicate. Ottoman Sultan Murad I purchased in 1381 Seydişehir, Akşehir, Beyşehir, Yalvaç, Şarkikaraağaç and Isparta from Bey Hussein, offering him 80,000 golden coins.
Incorporated into the Konya sanjak, Seydişehir was granted the municipal status in 1871, and elevated to a district municipality in 1915.
[Province of Konya website] 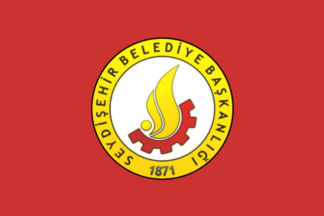 The former flag of Seydişehir was white (photo), or red (photo), with the municipality's emblem.

Flag of the Seydişehir district government - Image by Tomislav Šipek, 21 May 2020

The flag of the Seydişehir district government (photo) is white with the government's emblem. "T.C." stands for "Türkiye Cumhuriyeti", "Republic of Turkey"; "Kaymakamlığı" means "District government".
The emblem features the Seydişehir Kuğulu Park (photo) and its artificial pond, the Seyyid Harun mosque (photo), Roman ruins and the Taurus mountains in the background.