The flag of Taşkent (photo) is white with the municipality's emblem in the middle. "Başkanlığı Belediye" means "Municipality Presidency".
The emblem of the municipality features the town's emblem, Kible Rock (755 m; photo, photo) surrounded by pine forests. 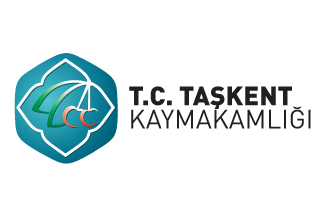 The flag of the Taşkent district government (photo) is white with the government's emblem in the middle. "T.C." stands for "Türkiye Cumhuriyeti", "Republic of Turkey"; "Kaymakamlığı" means "District government".