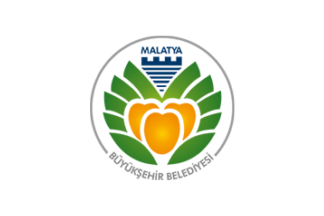 Turkey is the world's single largest apricot producer and Malatya Province in the southeastern part of the country is the principal apricot producing region. Most of Malatya's apricot production is marketed in dried form and represents about 65 percent of the world's dried apricot output.
Known for their sweet taste, Malatya apricots are perfect for drying because the pit is readily separable from the fruit itself. Our apricots are hand-picked, gathered, pitted, sulfated, and sun-dried for two days, after which they are compressed and sun-dried for another two to three days before being sold to local processing plants. We also offer natural or organic apricots which have not been treated with sulfur, and are easily recognizable by their dark color. These apricots have an extremely flavorful, sweet taste.
[Malatya Commodity Exchange]

The flag of the Malatya City Council (photo) is white with the council's emblem. "Kent Konseyi" means "City Council".

The flag of MASKİ (photo, photo, photo) is white with the administration's logo.

Malatya Chamber of Commerce and Industry/H3>

The flag of the MTB (photo, photo, photo) is white with the organization's emblem.