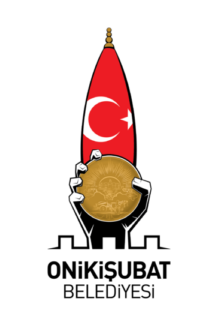 The former flag of Onikişubat (photo) was white with a very similar emblem.

Before the adoption of its first emblem, Onikişubat used a white flag with the municipality's name written in black capital letters (<photo).

The emblem features the Medal of Independence of the Turkish Republic (Türkiye Cumhuriyeti Istiklal Madalyası), awarded on 7 April 1925 to Maraş Province, subsequently renamed to Kahramanmaraş (Heroic Maraş). The medal, also featured on the university emblem, commemorates the first major battle of the Turkish War of Independence, fought in Maraş from 21 January to 13 February 1920. The French troops stationed in Maraş eventually retreated from the town, abandoning 10,000 Armenian refugees who were massacred by the Turkish troops.