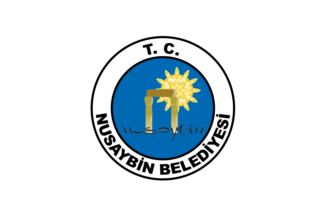 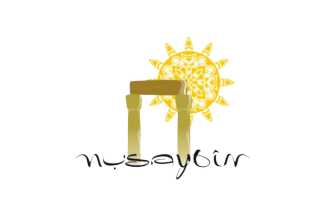 The flag of Nusaybin (photo) is white with the municipality's emblem in the middle. "T.C." stands for "Türkiye Cumhuriyeti", "Republic of Turkey"; "Belediyesi" means "Municipality". The municipality also uses another white flag charged with a simplified emblem (photo).
The emblem of the municipality features a Kurdish sun disk and the colonnade of the old town of Nisibis. The monument was photographed in April 1911 (photo) by the archeologist Gertrude Bell (1868-1926, founder of the Iraq Museum in Baghdad).

When the Greeks came to Mesopotamia with Alexander they called it Antiochia Mygdonia, under which name it appears for the first time on the occasion of the march of Antiochus against the Molon (Polybius, V, 51). Subsequently the subject of constant disputes between the Romans and the Parthians, it was captured by Lucullus after a long siege from the brother of Tigranes (Dion Cassius, xxxv, 6, 7); and by Trajan in 115, which won for him the name of Parthicus (ibid., LXVIII, 23). Recaptured by the Osrhoenians in 194, it was again conquered by Septimius Severus who made it his headquarters and established a colony there (ibid., LXXV, 23). In 297, by the treaty with Narses, the province of Nisibis was acquired by the Roman Empire; in 363 it was ceded to the Persians on the defeat of Julian the Apostate.
The See of Nisibis was founded in 300 by Babu (died 309). His successor, the celebrated St. James, defended the city by his prayers during the siege of Sapor II. At the time of its cession to the Persians, Nisibis was a Christian centre important enough to become the ecclesiastical metropolis of the Province of Beit-Arbaye. In 410 it had six suffragan sees and as early as the middle of the fifth century was the most important episcopal see of the Persian Church after Seleucia-Ctesiphon. A great many of its Nestorian or Jacobite titulars are mentioned in Chabot (Synodicon orientale, Paris, 1902, 678) and Le Quien (Oriens christ., II, 995, 1195-1204) and several of them, e.g. Barsumas, Osee, Narses, Jesusyab, Ebed-Jesus, etc., acquired deserved celebrity in the world of letters. Near Nisibis on 25 June, 1839, Ibrahim Pasha, son of Mehemet Ali, Viceroy of Egypt, won a great victory over the troops of Mahmud II.
[Catholic Encyclopedia]

The School of Nisibis was the main intellectual center of the Church of the East in the sixth and early seventh centuries C.E. and an institution of learning unprecedented in antiquity. Jews and Christians in Mesopotamia developed similar institutions aimed at inculcating an identity in young males that defined them as beings endowed by their creator with the capacity to study. The East-Syrian schools are the most significant contemporary intellectual institutions immediately comparable to the Rabbinic academies, even as they served as the conduit for the transmission of Greek philosophical texts and ideas to Muslims in the early 'Abbasid period.
[Adam H. Becker. Fear of God and the Beginning of Wisdom The School of Nisibis and the Development of Scholastic Culture in Late Antique Mesopotamia (presentation)]

Nusaybin Chamber of Commerce and Industry

Flag of the Nusaybin Chamber of Commerce and Industry - Image by Ivan Sache, 3 August 2019

The flag of the Nusaybin Chamber of Commerce and Industry (photo, photo) is white with the organization's emblem.

The Nusaybin Commodity Exchange was established by Decision No. 1,037, issued in 13 January 1994 by the Ministry of Industry and Trade. The organization became operational on 10 May 1994.

The flag of the Nusaybin Commodity Exchange (photo, photo, photo) is white with the organization's emblem.