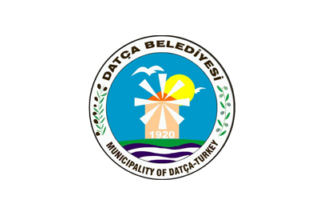 The flag of Datça (photo) is white with the municipality's emblem.

The emblem of the municipality features a windmill.
The Datça peninsula was once famous for its grain mills. A 200-year-old windmill (photo) in Datça district has been restored to its original condition, reported the Anatolia news agency. Datça Local Administration restored the windmills, which were built in the 1800s in Datça and used to mill grain until the 1970s. Noting that they were planning to rent out the windmills, Datça Local Administrator Mustafa Kaya said, “Windmills are some of the important symbols of Datça for the preservation of cultural values. There are 19 windmills in our district. Their condition was very bad. We restored one of them. The other 18 windmills will also be restored. We wish them to serve tourists after a restoration and environmental rearrangement process.” Kaya said the restoration work will contribute to Muğla's and Turkey's tourism. “Operating system of windmills has been rearranged by skilled experts of Muğla. We plan to open them to tourists this season. We receive demands to rent them,” Kaya added.
[H&uumlautrriyet Daily News, 18 June 2007]