Malazgirt was once known as Manzikert, probably named for Urartian king Menuas (8109-786 BC), who founded it as Menuahina (Menuas' town). Several later inscriptions mention the town's name in Old Armenian as Manavazakert, subsequently Manazcird in Arabic. The place was locally known as Kele (Fortress).
http://www.malazgirt.gov.tr/
Municipal website

The logos of Malazgirt feature the 42-m tall monument erected in 1989 to commemorate the battle of Manzikert.

The battle of Manzikert took place on Friday, 26 August 1071, between the Byzantine Empire and the Great Seljuk Empire of Iran for control over eastern Anatolia. Modern scholars have come to an agreement on the general origins and course of the battle, but some disagreement continues concerning the scope of the military disaster and the connection of the Byzantine loss to the pace of Islamization and Turkification of Anatolia. Although not the great military disaster often presented by medieval and some modern scholars, the Byzantine defeat did precipitate a Greek civil war and the Turkish occupation of large regions of Anatolia and is often described as a casus belli for the Levantine crusades.
In the spring of 1071 the Eastern Roman emperor Romanus IV Diogenes (r. 1068¢1071) marched east from Constantinople to shore up the empireÆs Armenian frontier against Turkish raiding. In late August he split his multinational army into two forces, personally commanding the smaller contingent and camping outside of the walls of the fortress city of Manzikert near Lake Van. His adversary was the second sultan of the Great Seljuk Empire of Iran, Alp Arslan (r. 1063¢1072), ruler of the most powerful Muslim state in the Near East and champion of the Abbasid caliph in Baghdad. Recognizing the threat posed by the Byzantine army, Alp Arslan abandoned his campaign against the Fatimids and moved to intercept the Christian army. The battle that unfolded over the course of a day witnessed desertion, defection, and betrayal among the Byzantine troops and the capture of Romanus. The Seljuk victory at Manzikert also showcased the best of 11th-century Central Asian steppe tactics against a divided and poorly commanded Byzantine host.
The decisive defeat of a Byzantine field army and capture of the Eastern Roman emperor sent shockwaves across the Christian and Islamic worlds and opened the floodgates of Turkish invasion and migration into Anatolia, strategically the most important region to the Byzantine Empire. A decade of civil war and Seljuk depredations further weakened the Eastern Roman Empire, forcing Byzantine emperor Alexius I Comnenus (r. 1081¢1118) to ask for military assistance from Pope Urban II. Seen in this light, Manzikert is often portrayed as the beginning of a series of events that eventually led to the origin of the First Crusade and Catholic occupation of the Levant.
The enduring legacy of Manzikert comes from its convenient use by historians, from the medieval period to now, as a turning point in Byzantine history, a military defeat often portrayed as the beginning of the decline of Byzantium and a martial event that ushered in the cultural transformation of Asia Minor from a bastion of Christian Orthodoxy to the eventual Islamic heartland of modern Turkey. For the latter reason, the battle of Manzikert takes on special significance in the 20th century as a symbol of enduring military power and independence for the Republic of Turkey.

The current flag (2020) of Malazgirt is white with logo.
http://hizmet-is.org.tr/faaliyetlerimiz/toplu-is-sozlesmeleri/mus-malazgirt-belediyesinde-mutlu-sona-ulasildi/

The flag of Malazgirt (photo) is white with the municipality's emblem in the middle. "Belediyesi" means "Municipality".
https://www.sabah.com.tr/mus/2021/03/13/malazgirtte-iaaf-onayli-tartan-pist-kazandirma-girisimi-basariya-ulasti 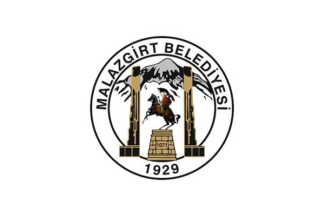 The flag of Malazgirt (photo) is white with the municipality's emblem in the middle. "Belediyesi" means "Municipality".