The flag of Avanos (photo) is white with the municipality's emblem in the middle. "Belediye Başkanlığı" means "Municipality Presidency".
The emblem of the municipality represents fairy chimneys found in the Göreme National Park, and a piece of the famous Avanos pottery.

The fairy chimneys have been formed as the result of the erosion of this tufa layer, sculpted by wind and flood water, running down on the slopes of the valleys. Water has found its way through the valleys creating cracks and ruptures in the hard rock. The softer, easily erodable material underneath has been gradually swept away receding the slopes and in this way, conical formations protected with basalt caps have been created. The fairy chimneys with caps, mainly found in the vicinity of Ürgüp, have a conical shaped body and a boulder on top of it. The cone is constructed from tufa and volcanic ash, while the cap is of hard, more resistant rock such as lahar or ignimbrite. Various types of fairy chimneys are found in Cappadocia. Among these are those with caps, cones, mushroom like forms, columns and pointed rocks.
[Cappadocia Online] 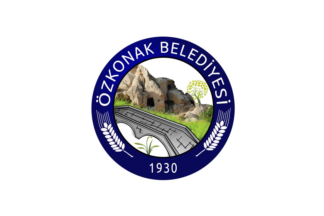 The flag of Özkonak (photo) is white with the municipality's emblem in the middle. "Belediyesi" means "Municipality".
The emblem of the municipality features Özkonak underground city and the Ottoman bridge (1541).

Discovered in 1972 by a farmer who noticed the water he would give to his crops seemed to mysteriously drain somewhere into the ground, Özkonak was found to be one of three expansive underground strongholds in the region (including Kaymaklı and Derinkuyu). Each of the cities featured multiple, stacked levels of dug out chambers connected to a shockingly sophisticated ventilation and water system. Özkonak differs from its sister cities in two important aspects however.
Across Özkonak's ten descending levels, there was a crude communication system installed so that each level could talk to the one above or below it, a feature that is unique to the city. Also unique to the city, is its system of holes just above the entrances to the city through which they could pour hot oil on any attacking forces.
[Atlas Obscura]