The flag of Niğde (photo) is white with the municipality's emblem. "Belediyesi" means "Municipality". The motto means something like "The town of living civilizations".
The emblem of the municipality features the I-shaped town's clock tower. Located inside the castle, the Ottoman clock tower is one of a number erected in 1902 to celebrate the 25th year of Sultan Abdülhamid II's reign.
[Today's Zeman, 17 May 2014] 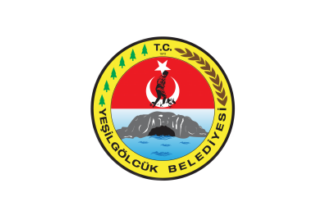 The flag of Yeşilgölcük (photo) is white with the municipality's emblem. "Belediyesi" means "Municipality".

ÖHÜ was established in 1992 as Niğde University. It was renamed in 2016 in honor of Infantry Sergent Major Ömer Halisdemir (1974-2016). During the aborted coup of 16 July 2016, Halisdemir prevented the capture of the headquarters of the Special Forces Command in Ankara by killing Brigadier General Semih Terzi, who commanded the assault, and was killed by the plotters.

Niğde Chamber of Commerce and Industry

Flag of the Niğde Chamber of Commerce and Industry - Image by Ivan Sache, 3 August 2019

The flag of the Niğde Chamber of Commerce and Industry (photo) is white with the organization's emblem.

The flag of NTB (photo) is white with the organization's emblem.