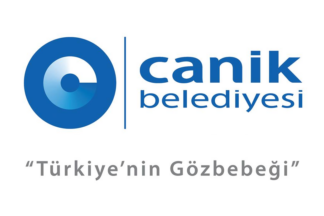 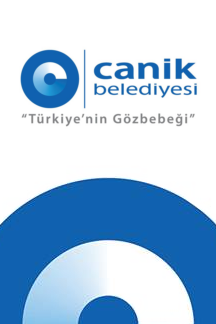 The flag of Canik, used horizontally (photo) or vertically, is white with the municipality's emblem. "Belediyesi" means "Municipality".
The emblem of, designed by Ali Seylan, was unveiled in October 2012. Mayor Osman Genç explained that the former emblem of Canik, featuring classical representations of mountains, hills, rivers and symbols of the sea, was deemed obsolete. The eye-shaped emblem represents Canik as the pupil of the Black Sea, highlighting the strategic location of Samsun.
The different shades of blue represent the sky and the sea, as open horizons. The white, C-shaped area in the center of the emblem stands for "Canik".
[Haber Exen, 8 October 2012]

The former flag of Canik (photo) was white with the municipality's former emblem. 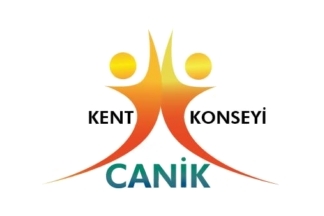 The flag of the Canik City Council (photo) is white with the council's emblem. "Kent Konseyi" means "City Council". The table flag (photo) is similar, in a different color scheme.