The flag of Baykan (photo) is white with the municipality's emblem. "Belediyesi" means "Municipality".

Flag of the district government - Image by Tomislav Šipek, 15 November 2018 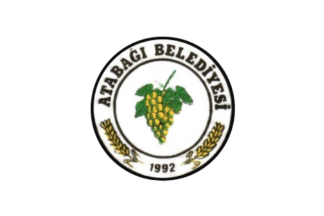 The flag of Atabağı is white with the municipality's emblem. "Belediyesi" means "Municipality".

The municipality of Veyselkarani, formerly known as Ziyaret, is located 10 km south-west of Baykan.

The flag of Veyselkarani (photo) is white with the municipality's emblem. "Belediyesi" means "Municipality". The emblem features the shrine of Veysel Karani, a Sufi mystic saint better known under his Arab name, Uwais al-Qarani.

The tradition says that Uwais al-Qarani lived in Yemen at the time of the prophet, whom he never personally met. Accordingly, he soon became the prototypical mystic saint, inspired by grace but without any physical connection with the Prophet. In the Sufi vocabulary, an uwaysî is a mystic saint who reached spiritual illumination without either mediation or a spiritual guide. The circle of those early Sufi defined the ideal Muslim life as islâm (the acceptation of the divine commandments prescribed in Quran), îmân (inner faith) and ihsân (search for perfection).
[Islamica]
The shrine was built in 1901 and covered with a dome. Replaced in 1967 by a new tomb, the monument was restored in 2001 in modern style. Veysel Karani's pilgrimage is held every year on 16-17 May, while 200,000 pilgrims pay a visit to the shrine every year.
[Gezi Yorumları, 4 December 2009]