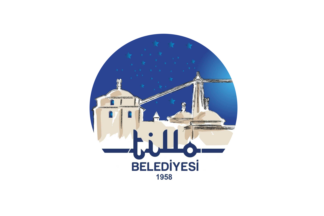 The municipality of Tillo (3,876 inhabitants in 2012, 1,832 in the village of Tillo; 6,920 ha) is located 40 km north-west of Siirt.
The municipality was renamed to Aydınlar (a Turkish name meaning "visionaries") in 1964. On 30 September 2013, a Constitutional reform allowed Turkish places to adopt non-Turkish names; accordingly, the former name of Tillo, meaning "holy spirits' in Syriac, was re-established on 30 October 2013 by the Parliament.

The flag of Tillo (photo) is white with the municipality's emblem. "Belediyesi" means "Municipality".

The emblem features the türbe and castle built by İbrahim Hakkı (photo).
The türbe stands in open land some of which has been used as a dervish cemetery. İbrahim Hakkı (1703-1780) was a Muslim mystic and thinker who was partly brought up at Tillo and, returning from time to time in his life, died and was buried there. He finished his education at Erzurum where his father died (1726), worked here as an imam, and for a time helped to build up libraries in İstanbul at the invitation of the sultan Mahmud I in 1747. İbrahim was in fact born at Hasankale (east of Erzurum). His father moved to Tillo (1710) to join the following of İsmail Fakirullah (1656-1734), a sheikh, i.e. the head of a dervish sect, who was an imam at Tillo. Fakirullah's family was of Arab origin and had come to Tillo in 1504 from Cizre.
İbrahim Hakkı's works, of which the most famous is his encyclopaedic Marifetname ("knowledge-work"), are well within Islamic tradition. He dwelt partly on natural science: its relevance, to him as well as to other writers, was that by learning about nature man learns about his body, thus about his soul, and thus about God. İbrahim, however, unlike some writers, was willing to accept non-traditional scientific ideas, including Copernican astronomy.

The tomb-chamber of the tûrbe built by İbrahim Hakkı for İsmail Fakirullah is an octagon roofed by a dome which rests directly on the vertical walls. By the doorway into the rectangular entrance chamber is a small tower. At the spring equinox the light of the rising sun, coming through a window in a castle four km away, also built by İbrahim, would be reflected by a prism on the tower to a lens in the dome, which would turn to on the tombstone of Fakirullah, in the tomb chamber (detailed explanation). İbrahim is also buried here, and others, including Fakirullah's son Abdulkadır. Restoration work in 1964 apparently damaged the system for reflecting light.
[T.A. Sinclair. 1989. Eastern Turkey: an Architectural and Archaeological Survey. Vol. III]