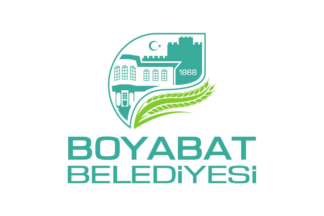 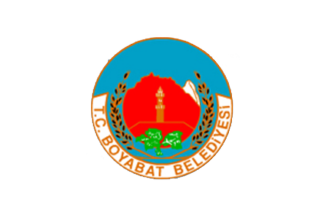 The flag of Boyabat (photos) is white with the municipality's emblem. "Belediyesi" means "Municipality". The emblem features the castle erected on a hill overlooking the town.

Established by the Paphlagonians in the year 600 BC, the Boyabat Castle has a 2,600 year history. The castle has been given a land registration number, by the government in order to accurately record its history, but has not been given an official registration date. Located on the edge of a river, the Boyabat Castle is extremely important for the Boyabat district in which it is located in. To climb up to the castle, there are a total of 252 stairs through a rock tunnel. Most of the stairs of the castle are broken and very steep, giving excitement for those that want to climb up to castle.
[Daily Sabah, 15 September 2015]

The former flag of Boyabat (photo, photo) was white with the municipality's former emblem. "T.C." stands for "Türkiye Cumhuriyeti", "Republic of Turkey".

Boyabat Chamber of Commerce and Industry

Flag of the Boyabat Chamber of Commerce and Industry - Image by Ivan Sache, 2 September 2019

The flag of the Boyabat Chamber of Commerce and Industry (photo) is white with the organization's emblem.