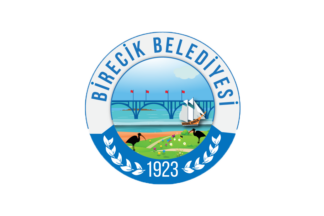 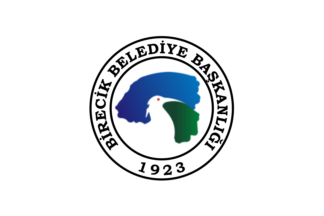 Flag of Birecik, current and former versions - Images by Tomislav Šipek, 13 May 2018

The ibis recall the legendary foundation of the town. After the Deluge, Noah released an ibis to find out a piece of land suitable for mooring. The bird landed on a promontory where Noah's family built a castle, while a colony of ibis settled the cliffs dominating the town that established downhill. Considered as a symbol of rebirth and fertility, the return of the ibis in mid-February was celebrated in the past as marking the end of the winter season. The ferrymen of river Euphrates considered themselves as Noah's followers and paid great respect to the ibis. This was reported in 1954 by Curt Kosswig, who visited Birecik with the Turkish photographer Cafer Turkmen.
The building of a bridge over Euphrates caused the decline of the ferries and the old traditions were lost. The increased use of pesticides in agriculture and to kill mosquitoes transmitting malaria caused the decline of the ibis population. Visiting Birecik in 1971, Udo Hirsch, from the WWF, could count only 30 couples of ibis and 11 juveniles, instead of the 100 birds previously reported. Hirsch convinced the local population to restore the Ibis Festival. The Turkish Government subsequently prevented winter migration of the birds - and the associated loss of birds - by setting aviaries, from which the birds are allowed to leave only in suitable periods.
[Bald Ibis blog, 1 July 2013]

The background of the former emblem must represent the Birecik Dam, built in 2000 on river Euphrates. The dam, of 62.5 m in height, closes a reservoir of 92,700 ha, whose water is used for irrigation. The power plant established at 2001 at the dam generates 2,500 GWh per year. The building of the dam caused the flooding of the ruins of the Hellenistic town of Zeugma and the resettlement of more than 5,000 people.

Birecik Chamber of Commerce and Industry

Flag of the Birecik Chamber of Commerce and Industry - Image by Ivan Sache, 15 November 2017