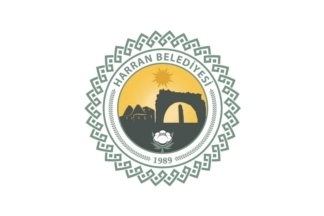 The flag of Harran (photo) is white with the municipality's emblem. "Belediyesi" means "Municipality".
The emblem, presented on 22 April 2019, features the same basic elements as the former one. The representation of the ruins of the old Harran University was changed to better match the actual site (photo).

The emblem features the last remains of the Harran university, a tower and an arch.
Harran hosted perhaps the world's oldest university in the world. Many philosophers, scientists, such as Al-Battānī (c. 858-929), who calculated the distance from the Earth to the Moon, Thābit ibn Qurra (826-901), who translated Greek classics and scientific works into Arabic, and wrote on mathematics and astronomy, and the physicist and chemist Jābir ibn Hayyān (c. 721 - c. 815) to name just a few of the figures who rose to prominence in the Harran school.
The Harranian school drew from many resources, they had their roots in Chaldea and schools of the Magi; they harbored priceless Greek scrolls and which would have otherwise may have been lost. They were influenced by Judaism, Christianity and Islam. They revered Hermes Trismegistus as their prophet and the Corpus Hermeticum as their holy book. Hermes Trismegistus was believed to be an ancient great Egyptian sage, perhaps Imhotep, who as the founder of writing and the author of many books on science, medicine, theology, ethics, astrology, alchemy and magic. In the Hermeticum we have his teaching in the form of mystic visions, He has been equated with the Greek god Hermes, and the Egyptian god Thoth or Tehuti, but the Hermeticum portrays a divinely inspired teacher. He has also been equated with Enoch in the Bible, and Idris in the Koran. Through the Hermeticum's monotheistic teachings, the Harranians where able to claim themselves as one of the "People" of the book, though Sabian might have actually referred more to the Mandaians of Iraq, who are followers of John the Baptist.
[K. Menemencioğlu. The Sabians of Harran].

The left part of the emblem features the 250-year-old conical domed houses of Harran, which have been declared an archaeological site and taken under protection. The region is home to nearly 1,000 such conical houses.
Each dome stood for a room in the house and symbolized the wealth of the people that used to live in the household. Rose oil, earth and egg yolk were used in the mortar of the houses, which are cool in summer and hot in winter thanks to their architectural structure and materials. The five-meter-high houses were built with bricks and become narrower to the top. The exterior of the houses were covered with wet clay, which allowed them to survive. The mortar of the houses, which are located in groups of two, three, four, and five, is renewed from time to time to prevent collapse. The houses are joined to each other from inside with arches, while the domes were not closed so as to allow in sunlight and permit smoke to escape.
[Hurriyet Daily News, 9 December 2015; MB Özdeniz, A Bekleyen, IA Gönül, H Gönül, H Sarıgü, T İlter, N Dalkılıç, M Yıldırım. 1998. Vernacular domed houses of Harran, Turkey. Habitat International 22, 477-485]

In the base of the emblem, the cotton ball recalls cotton production on the Harran plain.
In 1995 an area of 20,655 hectares on the Harran Plain was used to grow cotton, delivering a total of 82,603.6 tonnes in production. From 1995 to 2008, these figures have multiplied over five times: the cotton area is grown to be 113,121 hectares and production to be 435,139 tonnes. According to the published literature, yield and quality factors in the Southeastern Anatolia region are at low levels due to farmers’ inefficient production techniques, leading to negative impacts on farmer incomes. In a most recent study of Binici et al (2006) it was found that the majority of sampled farmers from the Harran Plain use inputs at inefficient levels. Moreover, the common practice of over irrigation on the Harran Plain is considered to be the major cause of elevated soil salinity (Cullu 2003), arising from shallow groundwater table (Cullu et al 2002), and leading to considerable reductions in cotton production (Cullu et al 2000). Thus, the scope for increasing input use levels with a stagnant yield trend is limited, underlying the fact that output growth to meet the growing demand for cotton must rely on improvements in technology and efficiency, an issue that has certain relevance to output elasticities of inputs used in production.
[T Isgin, A Bilgic, S Ipekcioglu. 2010. An analysis of cotton production technology on the Harran Plain. Journal of Agricultural Sciences 16, 254-261]