The flag of İpekyolu (photo, photo) is white with the municipality's emblem. "Belediyesi" means "Municipality".
İpekyolu means "Silk road" in Turkish, referring to the strategic location of Van on this main route of trade and communication. On the flag, the motto reads "The east-to-west long road", an other, straightforward reference to the Silk Road (aka the Long Road in Turkish), which is also represented on the emblem. 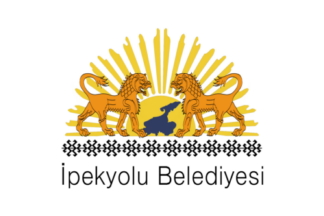 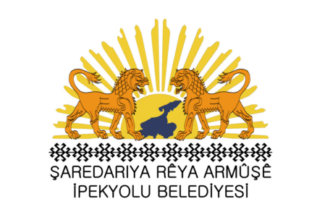 The emblem features the sun, lake Van, two lions and a rug.
The sun represents freedom, light and the future.
The lion, a common element in the Hurrian, Urartian and Armenian iconography, represents power, nobility and justice.
The rug, representing the local tradition, culture and art, bears a motif believed to be the antidote to scorpion's venom and repelling evils.
The colors of the emblem represent the soil fertility and lightness.
[Milliyet, 9 August 2014]

The former flag of Van (photo) was white with the municipality's emblem in the middle. "Belediyesi" means "Municipality".