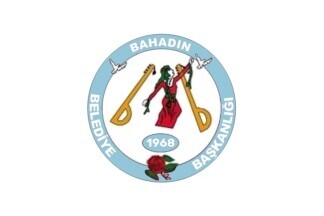 The flag of Bahadın (photo) is white with the municipality's emblem. "Belediye Başkanlığı" means "Municipality Presidency". 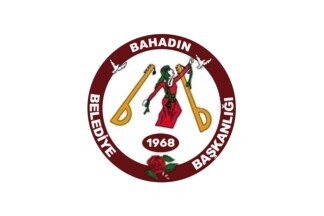 In addition to the flag with a blue circle, there is also a variant with a red circle as a newer variant.
https://www.haberler.com/bahadin-belde-belediyesi-bakilmayan-baglarin-4573115-haberi/
https://www.internethaber.com/belediye-baskani-aliskanlik-bana-bulasir-diye-2-yildir-bakin-ne-yapiyor-2211156h.htm 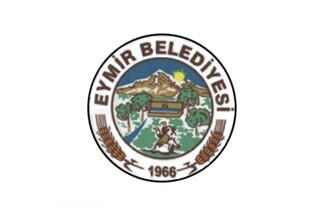 The flag of Eymir in Sorgun District is white with logo.
https://www.haberler.com/aydincik-eymir-yolu-karayollari-tarfindan-yeniden-8596251-haberi/ 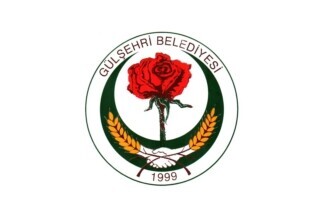 The flag of Gülşehri in Sorgun District is white with logo.
https://www.youtube.com/watch?v=h5PdRvghKzw 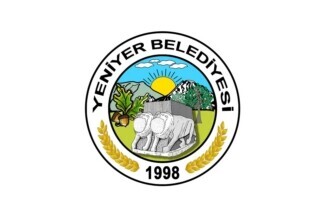 The flag of Yeniyer in Sorgun District is white with logo.
http://www.yeniyer.bel.tr/baskan-16-ozgecmis.html

Yeniyer (2,094 inhabitants in 2020), located 25 km east of Sorgun, was established on 11 April 2013 as the merger of the former municipalities of Karakız and Ahmetfakılı, established on 29 December 1998, whose population has fallen below 2,000. Karakız was renamed to Yeniyer, while Ahmetfakılı became a borough of the new municipality.

The logo features the Hittite lions found in Yeniyer.

Archaeologists have been working to solve the mystery of five-ton lion sculptures recently found in a field in Sorgun, a town located in the Central Anatolian province of Yozgat.
Two researchers employed by the Culture and Tourism Ministry have made preliminary searches in Sorgun’s Yeniyer neighborhood, where they say a field served as a sculpture atelier in the Hittite era. Now it is expected that the field will turn into an open air park museum, shedding light on a period of Turkey’s ancient history.
Yeniyer Mayor Osman Yilmaz stated, “It is not exactly known why these lion sculptures were created. It is estimated that they were made between 1,400 and 1,200 B.C. during the era when the Hittites ruled Anatolia. … The top part of their head is a bit higher than their neck. It is thought that these sculptures were dedicated to a holy water source.”

Large rocks in a stone pit, the biggest of which is in two-meter diameter, have also been found in the field, further complicating the mystery.
Commenting on the sculpture’s possible purpose, Yılmaz said, “Research done around Karakız [a Yeniyer neighborhood] show that the region was a Hittite settlement when these sculptures were created. On the other hand, due to the gigantic size of the lions, it was not much possible to make them in another place and move them here.”

Sorgun Chamber of Commerce and Industry

Flag of the Sorgun Chamber of Commerce and Industry - Image by Ivan Sache, 4 August 2019

The flag of the Sorgun Chamber of Commerce and Industry (photo, photo, photo) is white with the organization's emblem.