The flag of Bağlıkaya (photo) is white with the municipality's emblem. "Belediyesi" means "Municipality". 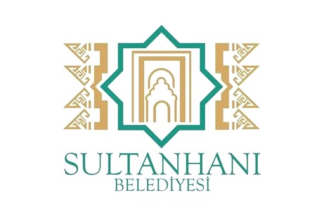 This is the largest, but not the oldest, of the Sultan hans, and is perhaps the most beautiful and impressive of all. It holds an important place in the history of Seljuk architecture. The most remarkable features of this structure are the arcaded courtyard, the twin majestic portals of the entry vestibule and the covered section, the vaulting system supported by piers, and the free-standing kiosk mosque rising on four piers in the middle of the courtyard. The stone decoration of the mosque and the portals is noteworthy for its elegance and artistic mastery.
The han lies parallel to the road, and faces south-west towards Aksaray. The Sultan Han is in the group of "classical plan" hans, that is, comprised of two parts: a huge enclosed hall on the south and an open courtyard in front of it. With this han begins the era of the "big" hans: the large-scale construction projects of the Ağzikara, Zazadin, Sultan Han Kayseri, Incir, Susuz, Obruk and Karatay hans.
There are two inscriptions, one over the main door and one over the covered section door. The one over the hall door states that it was built by the Seljuk Sultan Alaeddin Keykubad I in 1229. On the two sides of the arch crowning the portal niche one can read the name of the master-architect inscribed inside two hexagonal medallions: "Amele Muhammed bin Hav (la) n (el-Dimiski)". The word Dimiski indicates the origin of the architect, who came from Damascus.
After being badly damaged by fire in 1278, the han was renovated by the local governor Seraceddin Ahmed Kerimeddin bin El Hasan, as indicated in the inscription over the courtyard. After this extension, it became the largest caravansarai in Anatolia.
[The Seljuk Han of Anatolia]

The flag of Taşpınar (photo) is white with the municipality's emblem. "Belediyesi" means "Municipality". 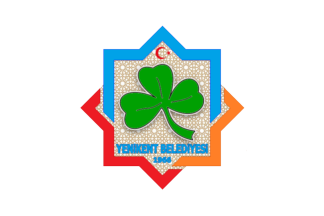 The municipality of Yenikent (4,676 inhabitants in 2007, website), established in 1966, is located 25 km of Aksaray.
The town was established, as Hamarat / Amarat, a name derived from Arab Imarret, by Grand Vizier Mehmet Pasha to house his personal library. The ruins of Eski (Old) Amarat are located 2 km of Yenikent. It is said that the stones of the bridge were used to build to central mosque of Yenikent (lit., New Town).

The flag of Yenikent (photo) is white with the municipality's emblem (image). "Belediyesi" means "Municipality".
The emblem of Yenikent represents the history, culture and natural environment of the town, which was located on the Silk Road. The three colors of the border and the clover leaf with three leaflets recall the town's motto, "Love, Tolerance and Friendly Service."

The emblem is framed by a Seljuk eight-pointed star. Such a star is commonly used in domes and ceiling of Seljuk building in Aksaray and in Taşpınar carpets, which were once woven in Yenikent. Starting from the vertical blue point and running clockwise, the points respectively represent compassion, kindliness, patience, truth, secrecy, loyalty, generosity, and gratitude to God.
The clover leaf represents alfalfa [a plant of the same family, Fabaceae], which is grown over 50,000 acres in the town, using the latest technology and cropping tools.
Green is the color of natural environment and a symbol of peace and relaxing. Green conveys a sens of openness and confidence, increasing productivity. It also evokes hope, innovation, rejuvenation and revival. Green represents here innovation in every area and Yenikent people's generosity, sharing and hospitality.
Blue represents the sky and the sea, freedom, peace and eternity. As a relaxing color, it offers comfort and peace to people. The upward point means rising, Yenikent being on its way to become a decent town.
Red represents physical activity, dynamism and youth; emotionally, it means happiness, perseverance and determination. It is a kind of power and aura, fostering human action.
Red represents Yenikent people's work, mobility and determination.
Orange is an exciting, happy, dynamic, striking and lucid color. It represents Yenikent people's eagerness to work.
[ Municipal website]

Aksaray University (Aksaray Üniversitesi - ASÜ; website) is a state university whose foundation was accepted by the Council of Ministers in 2006. The university was established by Law No. 5,467 published on 17 March 2006 in the official gazette No. 26,111, separating from Niğde University. ASU is composed of 10 Faculties, 2 Institutes, 8 Vocational Schools, 3 Schools and 3 Departments.

Some flags (photo) - including the flag hoisted in front of the university's entrance (photo, photo) - feature a simplified version of the logo, without the ring, the university's name and year of foundation being written in black letters beneath the emblem.

Aksaray Chamber of Commerce and Industry

The flag of ATSO (photo, photo) is white with the organization's emblem.

The flag of the Aksaray Commodity Exchange (photo, photo, photo) is white with the organization's logo.