Bayburt was originally founded by the Azzi people. Groups who subsequently either settled in the area or dominated it include the Cimmerians in the 8th century BC, then in the 7th century BC the Medes, followed by the Persians, the Pontic Empire, the Romans, the Byzantines (who called it Paipert), the Bagratid Kingdom of Armenia, the Seljuks, the Aq Qoyunlu, briefly the Safavids, and eventually the Ottomans.
The town prospered in the late 13th and early 14th century because of the commerce between Trebizond and Iran.
Bayburt was captured by a Russian army in 1828/1829 and the town and citadel were largely damaged by them. The British traveler William John Hamilton (1805-1887) commented on the ruins in the 1840s.
[Selsebil Travel & Tourism]

The citadel erected on the rocks that overlooks the town probably dates back to the Roman period, being reused by the subsequent rulers of the town. Completely revamped during the Saltukid period (12th century), the citadel was completed in 1200-1230 by Tughril Shah, the Seljuk Emir of Erzurum. The towers are 12-13 m in height while the height of the walls is about 30 m.
The Clock Tower (21 m in height) was inaugurating on 29 October 1924 during the celebration of the establishment of the Turkish Republic. Built with stones by artisans from Bayburt, the tower is equipped with four clocks and mechanism brought from Germany. 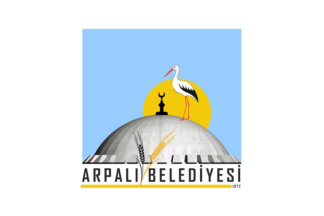 The flag of Arpalı (photo) is white with the municipality's emblem. "Belediyesi" means "Municipality".
The emblem, adopted in 2014, features Vefali ("Loyal") the emblematic stork that has been nesting on the dome of the central mosque and quite migrating for 14 years. Causing damage to the dome, the nest was once destroyed and reestablished after the restoration of the building. However, the stork preferred to live in the neighboring woods, until the artificial nest was removed and the bird could rebuild a nest of his own.
[Bayburt Postası, 15 March 2016]

Bayburt University (website) was established in 2008. The university is made of 5 Faculties and 4 Vocational Schools.