The flag of Karaman (photo) is white with the municipality's emblem. "Belediyesi" means "Municipality".

KMÜ (website), established in Karaman on 29 May 2007, is composed of 7 Faculties, 1 College, 5 Vocational Schools and 2 Institutes.

KMÜ is named for Mehmet I of Karaman (d. 1280) the third and greatest ruler of the Karamanid dynasty.
Mehmet gathered all Turkmen clans from Taurus around him. He defeated the Seljuk and Mongol forces, capturing Konya. Mehmet was the first ruler to establish Turkish as a state language, in a firman (Decree) dated 12 May 1277, he stated: ”Starting from today, in dervish convents, in councils, in the palace, in parliament and in squares, no language other than Turkish shall be allowed”.

Karaman Chamber of Commerce and Industry

KTSO (website) was established in 1926. After 10 years of service, it was incorporated to the Konya Chamber of Commerce and Industry. In 1949, it was re-established at the initiative of merchants and industrialists. 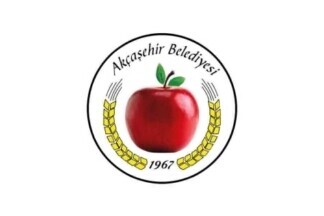 The flag of Akçaşehir in Karaman District is white with logo.
http://hizmet-is.org.tr/faaliyetlerimiz/toplu-is-sozlesmeleri/karaman-akcasehir-belediyesi-ile-toplu-is-sozlesmesi-imzalandi/
Tomislav Šipek, 29 October 2021

Apple is the most important fruit species for Karaman. Karaman is at the second place in planting area and production. About four million young tree were planted in Karaman in the last few years and also a private company has established the biggest short (dwarf) apple garden in Akçaţehir/Karaman.

In 2013, the province of Karaman produced 571,479 tons apples, that is 18.3% of the national production. Apple orchards covered 207,971 ha, 82.6% of them located in the district of Karaman. The district accounted for 71.2% of apple production in the province.
https://www.mevka.org.tr/Yukleme/Uploads/DsyTBTdhY53201932835PM.pdf
Investment Guide for Agricultural Sector of Karaman, 2014

The flag of Sudurağı in Karaman District is white with logo:
http://www.suduragi.bel.tr/baskan/baskanin-ozgecmisi/3/
Tomislav Šipek, 29 October 2021