The flag of Batman (photo) is white with the municipality's emblem. "Belediyesi" means "Municipality".

The new municipal emblem, adopted in May 2017, maintains from the former emblem the reference to oil industry, represented by the pumpjack, but adds architectural elements that were hitherto not present - probably to show that Batman is more than "Petrol City".
From left to right, the "skyline" features the Zeynelbey mausoleum in Hasankeyf, the Hasankeyf bridge surmounted by two wheat spikes and the year of foundation of the municipality, and an oil pumpjack.
[Batman Sonsöz Gazetesi, 28 May 2017]

The 550 year-old mausoleum (1,100 tons), built for the son of the Ak Koyunlu ruler Uzun Hassan, was transported on 2 km, using a special vehicle designed in the Netherlands, from its original location, soon to be submersed by the Ilısu Dam, to the newly established Cultural Park of Hasankeyf. The operation lasted 3.5 hours (video).
[The Guardian, 12 May 2017]

According to the local historian Ibn al-Azraq, the 200 m long Hasankeyf bridge of well-made stone masonry was constructed in 1116-1117 by the Artuqid ruler Fakhr ad-Din Qarâ Arslân (1144-1167) as a replacement for an earlier and more rudimentary bridge. The bridge, with its central arch of c. 40 m and its ascending succession of lateral arches, is a unique masterpiece of architectural engineering. The sides were pierced by corridors, providing shelter to the population of the residential quarters on both banks of the river, as well as being used for defensive purposes, as arrow slits clearly indicate.
[M. Meineke. Patterns of stylistic changes in Islamic architecture. Local traditions versus migrating artists. New York University Press. 1996]

Stones featuring figures of Roman soldiers on the legs of a 2,500-year-old bridge in the 12,000-year-old ancient settlement of Hasankeyf have been moved to a museum, as the historic bridge is set to disappear underwater in the wake of the controversial construction of the Ilısu Dam.
The restoration of the bridge spanning the Tigris River, which cuts through Hasankeyf, has recently been finished and the figures on the bridge were moved to the Batman Museum.
Batman Provincial Culture and Tourism Director İhsan Aslanlı said the figures were on display in the garden of the museum. “The figures are among the symbols of the historic Hasankeyf stone bridge. The bridge was constructed with 10 vaults. But because the bridge was partially damaged, only three of its vaults are seen on the Tigris River. The bridge was constructed between A.D. 1116 and 1126 during the reign of Fahrettin Karaaslan in Hasankeyf” he said.
It has been reputed as one of the most magnificent bridges constructed in the Middle Ages. Cut stones were used in the construction and the bridge was later filled with rubble stones. It has been reported that the bridge was constructed on the ruins of an ancient bridge. The bridge has a belt in the middle of it which serves as a door that opens and closes, symbolizing the security of the settlement.
But Hasankeyf and the stone bridge will soon be consumed by the waters of the Ilısu Dam.
[Hürriyet Daily News, 14 February 2018]

The new version of the logo and flag has been slightly modified compared to the previous one. 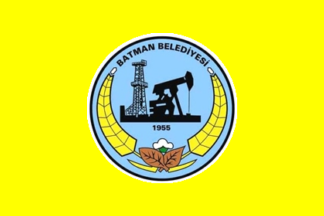 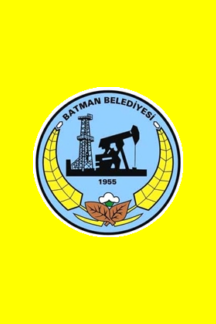 The former flag of Batman was white (photo) or yellow (used horizontally, photo, photo; or vertically, photo) with the municipality's former emblem.
The emblem represents oil extraction. The discovery of oil deposits near Batman in the 1940s caused an oil boom and a rapid and on-going population growth. The Batı Raman oil field is now the largest oil field in south-eastern Anatolia and Turkey (17 km x 4 km, with an estimated initial reserve of c. 1.85.109 STB).

The flag of Batman Special Provincial Administration is white with logo.

Batman University (Batman Üniversitesi; website) was established on 28 May 2007. The university is composed of 7 Faculties, 3 Institutes, 3 Schools and 4 Vocational Schools. The university has campuses in Batman (central campus), Batı Raman, Kozluk and Hasankeyf.

Batman Chamber of Commerce and Industry

The flag of the Batman Commodity Exchange (photo) is white with the organization's emblem.

The flag of BOSB (photo, photo, photo) is white with the zone's emblem.