The first initiatives towards the establishment of iron and steel industry in Turkey was started in 1925 by the Ministry of Economy. The first law on the establishment of the iron industry entered into force on 29 March 1926. The establishment of an iron and steel plant was decided in 1932, with the contribution of foreign experts. The construction of the Karabük plant, based on a £ 2.5 million loan agreement signed with the British government on 10 November 1936, was tendered to H.A. Brassert Company. The site was located between the Soğanlı and Araç streams. On 3 April 1937, Prime Minister Ismet inönü set up the cornerstone of the plant, which was put into operation ob 6 June 1939.
The Kardemir company was created in the 1950s, under the General Directorate of State Enterprises, evolving within the following years in a large organization, which has about 4,000 people. The company invested in shipyards, ports, dams, petrochemical plants, bridges, fitness and, most importantly, design of industrial plants, manufacturing and installation of Kardemir factories across the country. The original factory was awarded the nickname of "The Factory that creates Factories". Restructured in 1962, the company was privatized, as Kardemir Inc. (corporate website), on 30 March 1995. 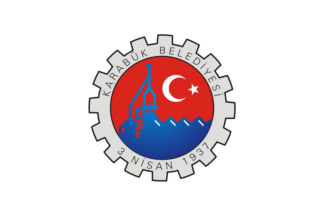 KBÜ, established in 2007, is composed of 14 Faculties, 4 Graduate Schools, 4 Schools and 7 Vocational Schools.

Karabük Chamber of Commerce and Industry

The flag of KTSO (photo) is white with the organization's emblem. The emblem features in the center the graphic elements of the emblem of the Union of Chambers and Commodity Exchanges of Turkey (TOBB).