Turkey: Ministry of the Interior

Flag of the Ministry of the Interior - Image by Tomislav Šipek, 2 October 2019

Flag of the Ministry of the Interior

The flag of the Ministry of the Interior (photo) is white with the ministry's emblem.

Former flag of the Ministry of the Interior

Former flag of the Ministry of the Interior - Image by Tomislav Šipek, 5 October 2015

The former flag of the Ministry of the Interior (photo) was white with the ministry's emblem.

Crampton [cra90f] describes the police flag as "Red with a large white-rayed star containing a red oval, with the crescent and star in white".
Lupant [lup95a] shows a similar flag, but the field of the flag is diagonally divided red and white. Znamierowski [zna99] shows this flag as hoisted over police stations.

The German state television ZDF brings a TV series with detective pieces that play in Istanbul. The series was filmed at original locations, showing the police flag as reported by Crampton.

A photo published in the Süddeutsche Zeitung, taken at a dinner given for the three German former hostages of the PKK by the Governor of the Ağri Province, shows a red and white flag with a seal in the middle with the word "Polis". There are further lettering "AǦR..." on the top of the flag, which may be the police flag of Ağri.

Pennant of Istanbul Police, as seen on 16 April 2013 at Istanbul Airport - Image by Klaus-Michael Schneider, 30 April 2014

The pennant of the Istanbul Police is white, swallow-tailed with the badge of the Turkish Police shifted to the top. The wreaths and the double-headed eagle at the bottom are golden yellow, however. The badge is surrounded by the blue writing "HALK İÇİN EMNİYET" (top) and "ADALET İÇİN HIZMET" (bottom) [Security for the People / in the Service of Justice]. Beneath the whole is placed the blue writing "İSTANBUL POLİSİ".

Flag of the Maritime Police - Image by Željko Heimer, 17 April 2003

The flag of the Maritime Police is a red triangular flag, in proportions 2:3, charged with the word "POLİS" written horizontally in white letters. This flag is shown in Flaggenbuch (1939) [neu92] and Album desPavillons [pay00].

The Municipal Police (Zabıta, website) is currently regulated by Law No. 5,393 "on municipalities and municipal police services", last revised in 2005 - but was established earlier (the badge of the Istanbul Municipal police [website] bears the date "1996").

The flag of the Municipal Police is blue (photo), or white, with the police's badge displayed in black and white in the middle. The flag is also used with the badge in full colours (photo, photo, photo).
The badge of the Municipal Police displays a white rising sun on a dark blue sky surrounded by a wreath of white leaves with dark blue lining. At the top of all is a lying red crescent with a five-pointed star pointing to the crescent, which is representing the Turkish Republic. 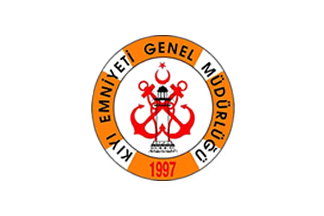 The flag of the Directorate General of Coastal Safety (Kıyı Emniyeti Genel Müdürlüğü - KEGM) (photo) is white with the directorate's emblem in the middle.