President of the Republic. 2:3
A green flag, with a blue border on three sides (except hoist) with an emblem in the middle. The emblem is actually the coat of arms of Tanzania without the supporters (but with elephant tusk) and without panel (but with the ribbon with the motto). The motto reads UHURU NA UMOJA (Freedom and Unity, in Swahili).
I suppose that this flag may be as old as the national flag, i.e. 1964. At least it is shown already in [smi75].
Zeljko Heimer, 28 Mar 2003

In all versions that I have the letters (in the motto) in the arms are red. Other differences are the parts of the ribbon featured in green, that are maroon or perhaps dark gold, and the fire that is gold or orange, darker than the torch. Until 1964 the arms were slightly different but I don't know if that shows on the presidential flag
Jaume Ollé, 06 Apr 2003 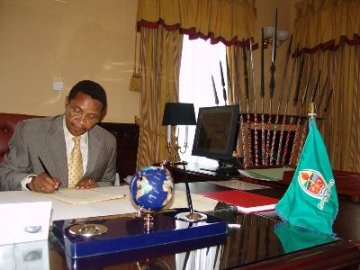 I received the following photo which shows a table flag of the Tanzanian President's flag but the blue fimbriation is not clearly shown.
Bruce Berry, 18 Jan 2006

At a close look with my magnifying glass I thought that I could see that the green flag has a fringe of blue. The reflection in the table top shows it clearly.
Andre Burgers, 18 Jan 2006 I have been able to locate a photo of the Tanzanian presidential flag confirming it does have a blue border, at least along the fly, top and bottom edges.
Ned Smith, 18 Jan 2006