British Resident of Zanzibar Flag 1890-1955
My source for Badge is "The Book of Flags" by Campbell and Evans 1965 [eva65]:
I quote: "the British Resident placed inside a garland at the centre of the Union Flag a picture of a dhow, a native boat with a triangular sail and flying a red flag, on a green sea against a blue sky. Above was the Royal Crown in red and gold".
Martin Grieve, 13 Jul 2002

Although Zanzibar came under British control in 1890 it was administered by the Foreign Office, and no British Resident was appointed until it was transferred to the Colonial Office in 1914.  It is not clear whether the flag came into use then, or whether it was in 1918, at the end of World War I.  The amendment to the Admiralty Flag Book was dated 1918.
David Prothero, 22 May 2003

I bet Martin's image follows strictly the original design, however shouldn't the ensign wave towards the bow -- as the sail does? In other words, the wind blows in the same direction for both sail and flag -- a common mistake in arms and badges depicting a sailing ship with ensign.
Santiago Dotor, 22 May 2003

You are correct.  Martin's image replicates all drawings of the badge that I have seen, but it's not the way the flag would be flying in the real world.  When British Guiana requested arms based on their sailing ship badge in 1953 the Colonial Office were asked to seek the help of the Admiralty "in ensuring that the design submitted is correct from a seaman's point of view".  The Admiralty suggested alterations to the waves, hull shape and colour, sails, yards and flags.
David Prothero, 22 May 2003 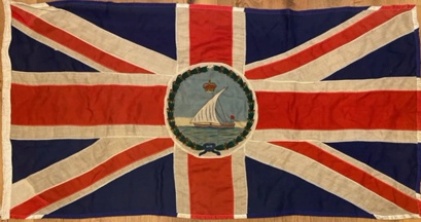 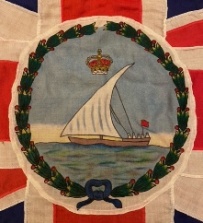 I have a flag of the British Resident of Zanzibar that I believe was actually flown above the British Residence (it certainly has the quality and reinforced edges).  It matches the images by Martin Grieve with the flag in the badge flying the opposite way to the sails. The badge has the blue sky coming down to touch the boat behind the people though rather than having a white stripe all the way across.
Martyn Overington, 17 Nov 2020