Since the 2014 intervention in Ukraine by Russian forces and proxy forces (i.e. separatists militias, mainly located in the self-proclaimed Lugansk People's Republic and Donetsk People’s Republic) and related conflicts onwards, i.e. Annexation of Crimea by the Russian Federation in February 2014 and the War on Donbass since April 2014, several military formations have appeared.

Starting from demonstrations back in April of 2014 and even before that (particularly in 2001 and 2009, there have been escalating tensions almost permanently.

Now, the military conflicts in the region, have as well seen the emergence of multiple groups, in this case the Azov Battalion (now a Regiment size Unit), which was incorporated into the "National Guard". Azov was a Special Task Patrol Service of Ukraine.

Патрульна служба поліції особливого призначення України, ПСМОП (English: Patrol Service of the Special Purpose Police of Ukraine, PSMOP). These units were established by Law "Про затвердження Положення про підрозділи поліції особливого призначення" (English: On approval of the Regulations on special police units), a Bill originally sent to Parliament on May 12, 2015, accepted on July 2, 2015, signed by the President on August 4, 2015 and enacted on November 7, 2015, reformed on January 1, 2017.

The above was a clear governmental measure to create militias/paramilitary forces in order to support the official government forces.

In fact, the commemoration first as an alternate "Independence Day Parade" (since Independence from the Soviet Union was issued on 24 August 1991, which had been up to that date the traditional independence day parade), a separate parade was starting to be held in memory of those volunteers who fought in the Russo-Ukrainian War of 2014-2015 (or "Війна на сході України", English: "The war in eastern Ukraine", or "Війна на Донбасі", English: "War in Donbass" (region), as it is known locally). This alternate event was first celebrated on August 24, 2019 as "Марш захисників України" (English: "March of Defenders of Ukraine") and called "Альтернативний парад" (English: Alternative parade) and derived from the establishment of a new national holiday, the "День українського добровольця" (English: Ukrainian Volunteer Day) on March 14, as follows: "Since March 14, 2017, Ukraine is marking Ukrainian Volunteer Day at the state level. On this day in 2014, the first 500 volunteer fighters of the "Самооборона Майдану" (English: Maidan Self-Defense (Volunteers)) arrived at the Novi Petrivtsi training ground to form the first volunteer battalion, and from there went to the East. Volunteers were among the first who defended the country. Together with the Ukrainian Armed Forces, they managed to stop the Russian aggressor at the cost of their own lives and health, to mobilize forces in the rear and to arm the army."
Sources: https://mva.gov.ua/en/news/14-bereznya-den-ukrayinskogo-dobrovolcya
https://uk.wikipedia.org/wiki/
https://uk.wikipedia.org/wiki/
https://uk.wikipedia.org/wiki/
, https://uk.wikipedia.org/wiki
and https://uk.wikipedia.org/wiki

Image of a slightly modified ancient German rune Wolfsangel, in black, called "Ідея Нації" (English: Idea of the Nation, IN, written in runic form either as "ꑭ" or ꏢ). It was the Social-National Party of Ukraine's first logo from its inception (1991) until the IX Congress Party held on February 14, 2004, when they changed their name to All-Ukrainian Union "Svoboda" and also changed their former "IN" into a hand forming a trident with its three fingers
(source: http://www.svoboda.org.ua/pro_partiyu/istoriya)
Notice that the Wolfsangel symbol is black instead of blue. An example of the use of both flags at the same time (party and militia) is seen here: https://www.firstpost.com/wp-content/uploads/2022/03/azov1.jpg, source: https://www.firstpost.com/world/russian-military-operation-puts-the-spotlight-on-ukraines-neo-nazis-what-you-need-to-know-about-them-10419921.html
Esteban Rivera, 24 August 2022 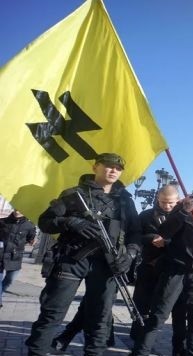 A flag with a yellow background with the Wolfsangel rune logo in the middle, in black). It is very common to see this flag among the Azov Battalion/Regiment.
Esteban Rivera, 24 August 2022

The logo featured on early flags and shoulder patch insignia. Image copied from the original, located here:
https://upload.wikimedia.org/wikipedia/commons/thumb/7/72/Emblem_of_the_Azov_Battalion.svg/800px-Emblem_of_the_Azov_Battalion.svg.png, source: https://uk.wikipedia.org/wiki/). This was the emblem when the military formation was a battalion size Unit. It was used from the beginning of the summer of 2014 to the end of the winter of 2015, more specifically from September 17, until August 11, 2015. See https://preview.redd.it/g9scu00r6yn81.jpg?width=960&crop=smart&auto=webp&s=e7d1765caef4671a9e6b54459fa30c56ffe3c7bb for explanation (image archived here).
Esteban Rivera, 24 August 2022 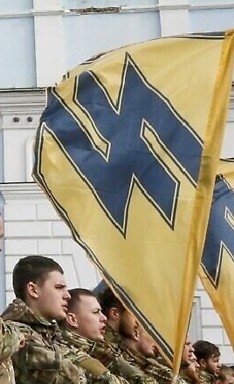 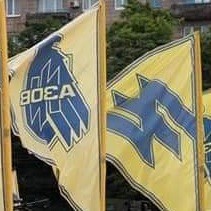 Flags with such unusual shapes and various designs, looking as if borrowed from some SF video source (movie, series or game) are frequently used by Ukrainian ultra-rightists.
Tomislav Todorovic, 25 August 2022

There are also other groups:

"Батальйо́ни територіа́льної оборо́ни, БТрО" (English: Territorial defence battalions, TerrDefB): were volunteer military units of the Armed Forces of Ukraine under the auspices of the Ukrainian Ministry of Defence in 2014–2015. They should not be confused with the volunteer units of "Патрульна служба особливого призначення" (English: Special Task Patrol Service of Ukraine which were created along with territorial defense battalions, but under the auspices of the Ministry of Interior. The battalions were established in mid-2014, during the early stages of the war in Donbas, to combat the pro-Russian separatists and the forces of the Donetsk People's Republic, Luhansk People's Republic, and the United Armed Forces of Novorossiya, the armed forces of the
(formally called) "Федеративное Государство Новороссия" (English: Federal State of Novorossiya ), Новороссия (which translates as New Russia) being a proposed Confederation of unrecognized states constituted by both, the Donetsk Republic and the Luhansk Republic, declared on May 22, 2014 and suspended on May 20, 2015. It claims to trace on the historical term of the Russian Empire denoting a region north of the Black Sea (now part of Ukraine). In Ukraine the territory was better known as Stepovyna (Steppeland) or Nyz (Lower land). 32 (although other sources mention 43, 44 and even 46) volunteer territorial defence battalions were formed:

In autumn 2014 most of the territorial defence battalions were reorganized as motorized infantry battalions of the Ukrainian Armed Forces. 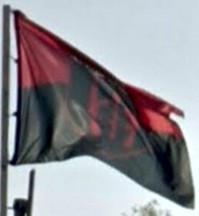 Now, in the current armed conflict, which escalated into a military campaign on February 24, 2022, there have been new military formations activated, under the "Війська територіальної оборони" (English: Territorial Defence Forces), which are the military reserve component of the Ukrainian Armed Forces. These Defense Forces are composed of Battalions (hence the term "Territorial defence battalions") and have been active since 2014 as well. Additionally, new militias (outside this hierarchy) are also starting to appear and be called "territorial defense units", since they have not yet achieved battalion size status, that is: composed of 300 to 1,000 personnel. Most likely, these new militias will either be incorporated to the already existing battalions or form new ones. The latest legal steps towards reactivation and reorganization of these military formations were taken on May 25, 2021 when the President passed a Bill to Parliament called "Про основи національного спротиву" (English: On the foundation of national resistance ), approved on July 16, 2021 and signed into Law on July 29 by the President. It was further amended on January 1, 2022 (other sources mention January 27). On Section I General Dispositions, Article 1 Basic Terms definitions, item 15, they are formally labeled as "Сили територіальної оборони Збройних Сил України" (English: Territorial Defense Forces of the Armed Forces of Ukraine) meaning a separate paramilitary force that acts in coordination with the existing Armed Forces. The new voluntary units are authorized by Resolution № 1449 of December 29, 2021 of the Cabinet of Ministers of Ukraine, in which the "Положення про добровольчі формування територіальних громад" (English: Regulations on voluntary formations of territorial communities) is approved. They are known as "ТрО" (English: TerrDef), "тероборона" (English: Defense), ТрОЗСУ (Romanized: "Sprotyv") (English: TerrDef ZSU), ЗСУ Romanized as ZSU, standing for Zbroini Syly Ukrainy, Armed Forces of Ukraine) and "ТериторіальнаОборона ЗСУ", (English: Territorial Defense ZSU). 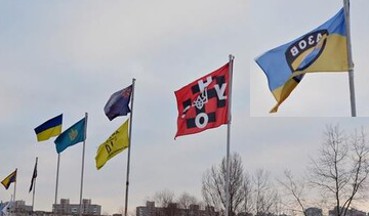 Flags of different factions that were involved in the fighting) (cropped image from the original located here:
https://georgianlegion.com.ua/images/novyny/1917000_1664205160486286_2818795244783449221_n.jpg, source: https://georgianlegion.com.ua/novini/631-vidkrittya-pam-yatnogo-znaku-na-chest-zagiblikh-dobrovoltsiv-foto-video).
From right to left, I can locate 12 poles, but cannot identify all the flags:
1. Azov
2. Ukrainian National Self-Defence
3. Two flags in the same pole (cannot identify either of them, thus these are two UFEs)
4. OUN
5. Ukraine
6.-12. Imperceptible

"OPENING OF A MEMORIAL SIGN IN HONOR OF FALLEN VOLUNTEERS (PHOTOS, VIDEO)

On December 19, a memorial sign in honor of all the fallen volunteers of the Russian-Ukrainian war was erected on the Dobrovolets Park Alley in the Desnianskyi district of Kyiv. The flags of all volunteer battalions participating in this war were raised on 6-meter flagpoles nearby. These flags will remain there forever, so that people will remember those people who did not hesitate to leave peaceful life and stand up for Ukraine. Among the flags that are now flying there is the flag of our Georgian National Legion."
This is dated December 19, 2015, although by late 2014 there were already some display of unit flags
Sources: https://m.facebook.com/ps.kyiv/posts/1529329597333893 and
https://uk.wikipedia.org/wiki/