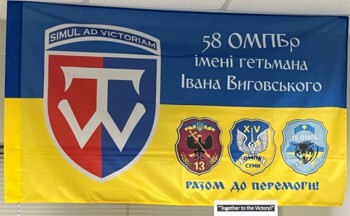 The flag in question has the same color composition background as that of Ukraine, that is: blue on top and yellow on bottom.
To the left it features the patch insignia, having a shield with silver outline, divided in the middle vertically by two equal stripes, left in red and right in blue, superimposed by the monogram "TW" in black capitals, with the motto on top in Latin SIMUL AD VICTORIAM (together for victory).
To the right, on the blue stripe, it features the name of the Unit: 58 ОМПБр 958th IMIB0 імені гетьмана = in memoriam Hetman Івана Виговського = Ivan Vyhovsky