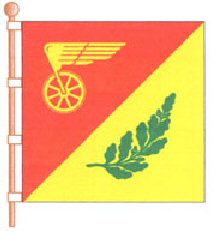 From the site of Ukrainian Heraldry:
"It was confirmed by city council session at September, 12th, 2002. The square panel is divided on a diagonal from the top free corner into two equal triangular fields; in top red is a yellow mark of the railway, in bottom yellow is a green oak branch.."Znak" 28 (2002))."
Dov Gutterman, 8 June 2003

The Ukrainian Heraldry site show a yellow oak branch on green background on the flag and Coat of Arms. However,
<www.auc.org.ua> show the opposite on both.
Who is correct?
Reding the text at the Heraldry site : "in bottom yellow is a green oak branch" mean that their own image is wrong....
Dov Gutterman, 19 July 2004 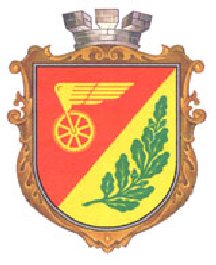 From the site of Ukrainian Heraldry:
"It was confirmed by city council session at September, 12th, 2002. The shield per bend sinister on the gules and or. Im the top field is or wheel with a wing (a mark of the railway), in the bottom or field is vert oak branch with nine oak leaflets and to four acorns. The authors are V.Kryvenko and O.Poljachok.
The symbol of the railway specifies that city has received development due to the railway station construction. The oustanding natural and historical factor for development of city became the Black wood. The oak symbolizes endurance, force, courage and resistance of intentions. Color scale: yellow (or) is symbol of riches and greatness, gules is symbol of courage and boldness, vert is symbol of well-being and hope."Znak" 28 (2002)."
Dov Gutterman, 8 June 2003

from the site of Ukrainian Heraldry

from the site of Ukrainian Heraldry

From the site of Ukrainian Heraldry:
"here was found as railway station at 1869 by construction of the Odesa-Kharkiv railway. The station has received the name of village Znamyanka located for 3khms. from it. That village was found at 1730 by immigrants from the central Russia (it is probable - from Znamenske village of the Oryol province). Station and office was constructed in the Black wood. The Black wood is located on a right coast of the Ingulets' river. During the tatar attacks on Kyiv and Podolia there passed the Black way which moved tatars. In the wood they concentrated the groups before attacks. In 1764-81 the name "black" was applied to large territory of modern district which entered into Black hussar military settlements Naturalists connect the name "Black wood" from very much shaded, dark oak trees."
Dov Gutterman, 8 June 2003