The flag of UNESCO show its logo in white on UN blue, akin to most other organizations of the UNO system. The logo is a stylized Ancient Greek temple portico, with three stairs steps, seven columns and a pediment, the columns being the letters "UNESCO" in a condensed (sans serif) typeface set very loosely.
António Martins-Tuvalkin, 31 May 2008 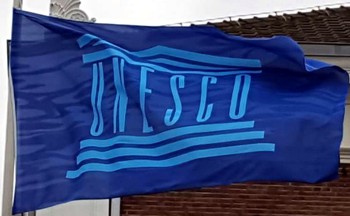 An image of an UNESCO flag that I spotted in Delft, Netherlands this week, that is different from the one above. The field is dark blue, logo is larger, and is in light blue.
Dave Fowler, 9 July 2016

Universal Flag of Peace and Solidarity

Jean Illel is a French poet and designer, currently President of the Club of Poets and Artists at UNESCO (United Nations Educational, Scientific and Cultural Organization). On 10 December 1998, for the 50th anniversary of the Universal Declaration of Human Rights, Illel presented the Universal Flag of Peace and Solidarity, a flag horizontally divided black-white-red-yellow.

I have not found any reference to this flag on the UNESCO website. Therefore, I believe Illel's flag has remained unofficial until now.
Source: http://jean.illel.free.fr/sommaire.html
Ivan Sache, 12 August 2002

Note the similarity with the flag of the Miccosukee Indian tribe flag in USA.
John Ayer, 14 August 2002