The ITU is the specialized agency of the United Nations which is responsible for information and communication technologies. ITU coordinates the shared global use of the radio spectrum, promotes international cooperation in assigning satellite orbits, works to improve telecommunication infrastructure in the developing world and establishes worldwide standards. ITU organizes worldwide and regional exhibitions and forums, bringing together representatives of government and the telecommunications and ICT industry to exchange ideas, knowledge and technology. The ITU is active in areas including broadband Internet, latest-generation wireless technologies, aeronautical and maritime navigation, radio astronomy, satellite-based meteorology, convergence in fixed-mobile phone, Internet access, data, voice, TV broadcasting, and next-generation networks. ITU is based in Geneva, Switzerland.
Zoltan Horvath, 27 April 2011

Its flag is blue (but its shade is darker than UN blue) with its white logo on it. It consists of a white globe, a red flash and its abbreviation in blue. There are many variations, but based on these images, this variant seems to be the official version.
Images of flag:
http://i.ytimg.com/vi/MpD0Y4zeZYM/0.jpg
http://farm3.static.flickr.com/2594/4190132034_b690c7545e.jpg
Zoltan Horvath, 27 April 2011

Alternate versions of the flag

The International Telecommunications Union has a typical flag following the UNO pattern. The Office of the Secretary General shows a different (I suppose, modernized)
flag behind Mr Touré: http://www.itu.int/osg/ which is better viewed here (a double-sided flag, apparently), as used at the World Summit on the Information Society, Tunis 2005: http://www.itu.int/wsis/plib/detail.asp?y=2005&n=6850 While the office item seems to have a pale blue globe the outdoor version is more striking. Common are the white ground, red flash, and dark blue (fimbriated) initials. The above official site has a French version showing an ‘UIT’ logo which ought to appear on flags as well, I feel.
Jan Mertens, 13 April 2007 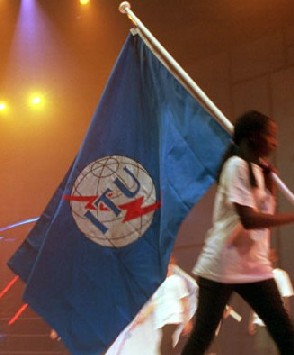 Here however we see a dark blue flag with modernized logo. Caption: "ITU Flag waving at the [ITU Telecom World, jm] Opening Ceremony, 9 October 1999". Would there have been three official versions, then?
Jan Mertens, 13 April 2007 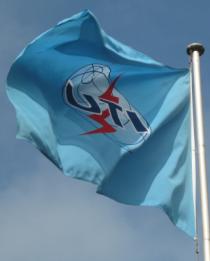 The ITU flag I saw at their main office in Géneve. (Picture taken on November 11, 2011 at their main offices) I don't know if this picture shows the reverse side or the front side of the flag (maybe someone can point that out). Also notice that the blue shade in the flag I attach is actually lighter than we have one featured here. My best guess is that the ITU flag is the UN light blue background plus the white logo with the red thunder and the dark blue filled initials with white outline.
Esteban Rivera, 22 January 2012

The reverse is flown in the flag . The logo in the centre will be well-known to anyone who collects stamps, since many countries issued sets in the mid 1960s to commemorate the organisation's 100th anniversary ( for example - http://nzpost-stamps.mycdn.co.nz/sites/default/files/issue_historic/1104/1965---ITU22.jpg?1298345582 ). Some of these stamps (from Fench-speaking countries) show the initials on the logo as UIT, so presumably the organisation is at least bilingual, and other flags with other initials may also exist (it's a shame the French isn't "Union de Télégraphie Internationale" - if it was then the reverse and obverse would have both sets of intials!).
James Dignan, 22 January 2012

There is also a variant where the French logo was used on a dark blue background at an office located in Geneva, Switzerland.
Zachary Harden, 03 November 2021