Two flags can be seen in an image from Disneyland. One is of Disneyland, and the other, with Mickey's head, must be Disney Corporation's.
Jose Alegria Diaz, 12 April 2003

At www.allearsnet.com/tp/wander/wander84.htm, a flag hoisting ceremony at the Disney's Wilderness Lodge hotel in the Walt Disney World Resort in Florida, United States, is shown. Were hoisted the flags of the US, Florida, Disney and Wilderness Lodge.

The Disney flag as shown is dark green with a large thin sans-serif golden yellow capital "D", enclosing the Disney "Mickey-world" logo (an iconic globe with gridlines and two solid discs on either side, offset to the top), in black.

This is completely different from a previously reported Disney flag, which was red with a black and white "natural" Mickey Mouse likeness.

The Walt Disney World Resort logo shown on the flag is slightly different than en.wikipedia.org/wiki/Image:Wilderness_Lodge_Color.png one (which nonetheless I used as clipart). 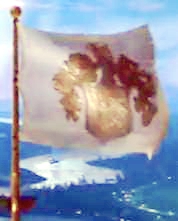 This flag flies atop the Disney Castle (called Cinderella Castle, maybe the original castle of Disneyland California, or  perhaps the castle at World Disney World in Florida). Most of the time, whenever a "Disney" movie starts (and by Disney it could be any of its divisions), in the opening credits, one can see a flag above the castle, which is a horizontal white flag with an unidentified golden coat of arms in the middle.

The crest [arms] is the Disney family coat of arms.
Willy Moody, 30 January 2018