Positional Color, Chief of Staff, U.S. Army. This color is used by the Chief of Staff in lieu of the rank flag (red with four white stars and yellow fringe) that would normally be displayed by a four-star general. It is displayed with cord and tassels of red and white.
Tom Gregg, 25 May 1998

Positional Color, Vice Chief of Staff, U.S. Army. Similar to the Chief of Staff's color, but quartered diagonally. This color is displayed with cord and tassels of red and white.
Tom Gregg, 26 May 1998

Director of the Army Staff

Positional Color, Director of the Army Staff. The badge is the branch insignia of the General Staff. The black and yellow of this color derive from the cords of mixed black and gold that used to be worn by staff officers on the campaign hat. The Director of the Army Staff is a lieutenant general (three stars); he is the Army's top operations officer. This flag is also the positional color for the Deputy Chiefs of Staff.
Tom Gregg, 25 May 1998 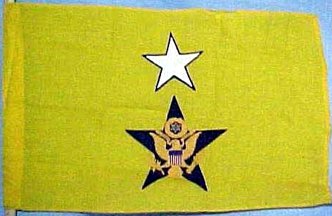 Posted on Ebay in 2014 was an original issue vintage auto fender flag as used by Dwight D. Eisenhower while serving in Washington D.C. as Deputy Chief of the War Plans Division (DCWPD) in late 1941 to early 1942. DCWPD Auto fender flag ~19"x 29" background wool material is golden rod yellow in color, with a sewn on both sides large black cotton star with the US Coat of Arms eagle outline embroidered in the center. Above is a smaller white star outlined in black. Inside the pole slip sleeve is a 22 Dec 1940 dated tag.

Service History: In June 1941, Eisenhower was appointed Chief of Staff to General Walter Krueger, Commander of the 3rd Army, at Fort Sam Houston in San Antonio, Texas. He was promoted to brigadier general on 29 September 1941. Eisenhower then served as Chief of Staff of the Blue Army in the August-September 1941 Louisiana Maneuvers. After the 7 Dec 1941 Japanese attack on Pearl Harbor Eisenhower was assigned to the General Staff in Washington, where he served until June 1942 with responsibility for creating the major war plans to defeat Japan and Germany. In the first days of the war he had been appointed Deputy Chief in charge of Pacific Defenses under the Chief of War Plans Division, General Leonard T. Gerow, and then succeeded Gerow as Chief of the War Plans Division. Then he was appointed Assistant Chief of Staff in charge of Operations Division under Chief of Staff General George C. Marshall. It was his close association with Marshall that finally brought Eisenhower to senior command positions. Marshall recognized his great organizational and administrative abilities. Eisenhower was promoted to Major General, Army of the United States on 27 March 1942.
Bill Garrison, 13 February 2014

This was the flag of a Brigadier General, General Staff, US Army, shown on Flaggenbuch 1939.
Miles Li, 14 February 2014