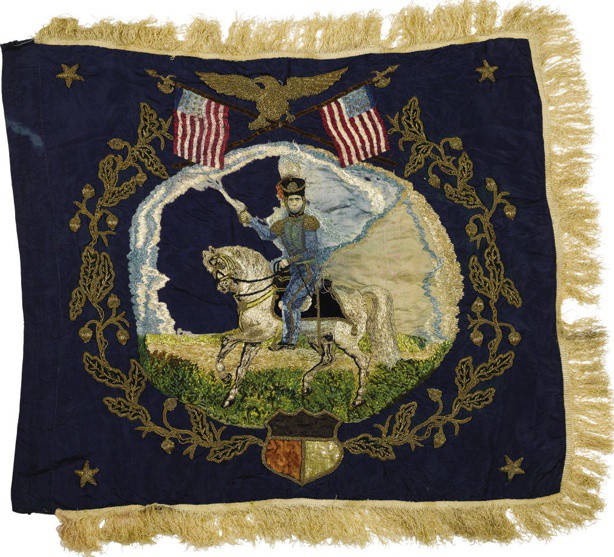 Originally posted at http://cgi.liveauctions.ebay.com/ws/eBayISAPI.dll?ViewItem&item=170118089316 [no longer available, reproduced below]

Cavalry Flag of 3rd New York "Hussars" This exquisite and quite rare style of embroidered flag belonged to Capt. George W. Sauer's Company C of the 3rd Cavalry, known as the "German Hussars" from New York City. They volunteered for federal service and left the state on July 23, 1861. The company was composed of one hundred volunteers from other companies upon the request of the General Government for some cavalry, for three months' service, and left the state July 23, 1861.

Side A: Blue silk field, gilt thread star in all four corners. Center panel is composed of a floss silk portrait of the Hussar's commanding officer mounted on a white horse, sword drawn and raised in his right hand with gilt epaulets. Wearing a medium blue triple breasted Hussar pelisse and a black leather shako. Trousers matching the jacket in color with a gold stripe on the outer seam. All set against blue sky with white clouds interspersed. Stars are 1 1/4" across points. The fringe measures 2 1/4".