The National Color of the 4th U.S. Infantry circa 1861-62, based on a description and illustration in a book on Civil War uniforms. As a regiment of the Regular Army, the 4th U.S. Infantry's colors conformed to War Department regulations (which were routinely ignored by State volunteer units). The canton contains 33, not 34 stars because existing colors were used until they became unserviceable even if the number of stars did not reflect the current state of the Union. The regimental designation appears in blue on the red stripe at the bottom of the canton.

This design provided the basis for the many and varied National Colors carried by Federal infantry regiments during the Civil War. The most frequent variations from standard were gold stars, six or seven-pointed stars, the U.S. Coat of Arms in the canton with the stars, gold rather than dark blue unit designation inscriptions.

During the American Civil War, the students and faculty at Harvard University organized a regiment in the Union Army known as the Harvard Regiment. The Regiment saw action at the Battle of Balls Bluff during the Peninsula Campaign of early 1862. An image of this flag is available at www.fas.harvard.edu/~memhall/warflags.html. The webpage says that the regiment received its nickname because a high percentage of its officers were Harvard alumni. It doesn't indicate they were current students or faculty, nor that they were the organizers of the regiment.
Ron Lahav, 19 January 2006 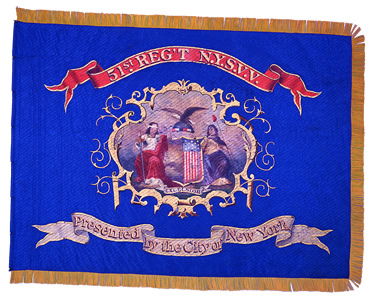 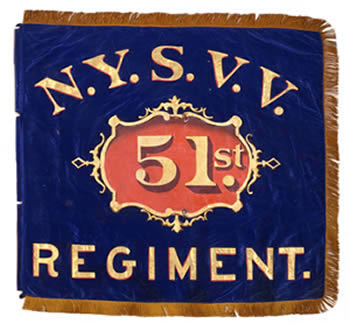