Commandant of the Marine Corps

The flag displayed by the Commandant of the Marine Corps is interesting inasmuch it is a combination rank flag/U.S. Army-type positional color. It displays the four stars of the Commandant's rank in the diamond pattern used on regular Navy and Marine Corps rank flags, but with the badge of the USMC inside the stars. It is also larger in size than the normal 3' hoist by 4' fly rank flags, being 4' on the hoist by 5'6" on the fly -- thus conforming to the dimensions of the positional colors of the other service chiefs.
Tom Gregg, 13 March 1998 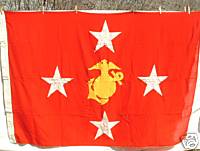 Flag for outdoor use 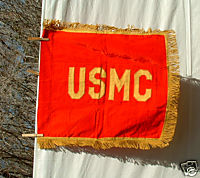 Commandant of the US Marine Corps flag for outdoor use on free standing staff with halyards.
Bill Garrison, 12 March 2009